Cast a Long Shadow captures a tribute gig to the late Joe Strummer, recorded at the Key Club, Los Angeles in December 2007. 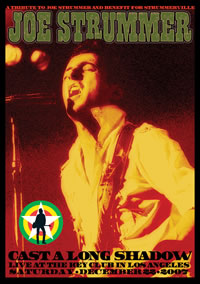 The DVD presents the musical offerings from the evening of 22nd December 2007, showcasing a diverse mix of talent, united to celebrate the life of Joe Strummer whilst raising awareness and finances for Strummerville; a registered charity that aims to create new opportunities for aspiring musicians.

The DVD captures the quintessential gigging environment and atmosphere of The Key Club, with the tightly packed crowd up close and personal with the artists performing on the stage.

The interesting aspect of the DVD is the diversity of musicianship on show.  Solo performances from David J and later with his band “Love & Rockets” were really enjoyable, with the latter providing a near perfect rendition of “Should I Stay or Should I Go”.

It was Zander Schloss who arguably stole the limelight of the gig, when his band graced the stage, led by the man himself (featuring a guest appearance from Flea on trumpet). Playing a range of classical, acoustic, 12-String and Ukulele instruments, there’s no doubt he’s an extremely talented guitarist & musician.

The musicians who performed that evening were united in respect to Joe Strummer, pledging their support to the Strummerville charity and performing a mix of songs from his back catalogue.

A fun aspect to the DVD is the rawness of the recording, embracing the atmosphere of the rocking Key Club.

I’d say that if you’re not too familiar with Joe Strummer’s music, you may find this DVD fairly hard to embrace, but I imagine fans of diverse live musical performances, especially fans of Joe Strummer, would really enjoy this.

Proceeds from the sale of the DVD benefit the Strummerville charity.