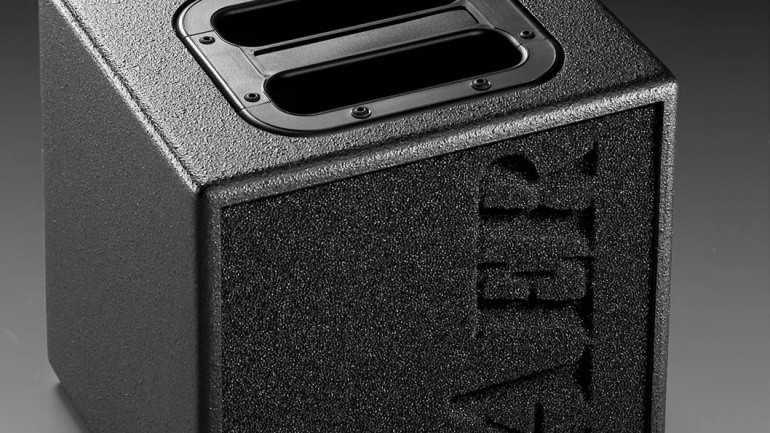 After a bout of acoustic amplifier window-shopping six years ago, it didn’t take long for me to realise the AER Alpha was the right choice for me, and I bought it straight away. It is still with me and working and performing beautifully, having been gigged quite strenuously since I bought it back in 2007. 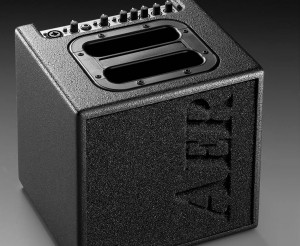 The AER Alpha acoustic amp is an exemplar of fine German engineering and musicians’ ingenuity combined, packed into a modest 40 watts of output. Don’t be fooled by the number, though; it’s 40 extremely well-used watts.

AER (“Audio Electric Research”) are a German-based company who offer a range of different amplifiers and guitar pickups.

The Alpha 40 is the baby of the family, packing 40w into a small, practice-amp sized box.

Looks are most definitely deceiving in the case of the Alpha; the moment you plug your electro-acoustic guitar into this, you’ll be amazed at the clarity, the warmth and the depth this little thing produces.

The amp has two inputs on top; Channel 1 is a combi XLR/jack socket, meaning you can plug either a microphone cable or a standard guitar jack into it, and Channel 2 is a standard instrument jack input.

This allows for quite a few combinations – you can plug a microphone into Channel 1 and your guitar into Channel 2 if you’re a solo performer at a small venue, for example. Both inputs have ‘sensitivity pad’ buttons, meaning you can use either passive or active pickups and/or microphones. Both channels have gain sweep knobs to control the input.

There are bass, mid and treble sweep knobs which allow you to ‘EQ’ the overall signal to your liking – great for finding your perfect tone even if your guitar pickup isn’t that well-endowed.

Channel 2 also has an interesting “Colour” button that activates a midrange contour filter and boosts presence, which, according to AER, can sweeten your overall acoustic sound.

Also included is a built-in reverb controlled by a single “Effect” sweep. I personally like this reverb effect and use it almost all the time, but if you have another effects unit you can also bypass the built-in reverb and plug in your own unit easily. There is also a master volume sweep.

On the rear panel you have the power cable input and on/off switch, a headphones out socket, a line-out socket, a DI-out socket, a foot-switch control socket, and send/return sockets for external effects units as mentioned above.

If you are playing in a larger venue and wish to plug into the venue’s PA system, you can either use the DI-out which sends a balanced, post-EQ signal (without effects), or the lineout which sends an unbalanced post-master signal (with effect signal). I frequently do this in larger venues (usually via line-out as I prefer to include the reverb signal) and the result is absolutely stunning.

I have used the send/return sockets in the past with external effects unit and they have worked really well. I have never used the foot-switch control as I don’t use/need pedals.

It really is as simple as plugging your guitar in, adjusting the gain, EQing (and adding a touch of reverb if you want) and you’re good to go.

No messing around, just great acoustic sound. It could not be easier to use this little amp, even for players new to amplifiers or guitar equipment.

This is where the Alpha 40 shines. I have never heard a better acoustic amplified sound than what comes from this amp.

It produces surprisingly fat bass, smooth mids and sparkling trebles. Do not expect trouser-flapping bottom end or ear-piercing volumes – save that for your Fender Twin! What you can expect though is absolutely distortion-free, crystal clear acoustic sound that can easily project in small to medium-sized venues. I’ve had people come up to me at gigs and ask how something so small can produce such a great overall sound and where they can get their hands on one.

If you happen to accidentally drive the amp too hard, it also has a built-in clipper which will activate by dropping the volume for a second or two to protect the speaker. This has happened me on occasions and it has worked very well – no damage done.

This little thing is seriously well-built. I am entirely content that the Alpha will perform each and every time I use it, and six years on I have absolutely no complaints or failures. I use it with confidence every single time I gig.

The Alpha 40 is by no means a cheap amp; a quick Google search and you can see that it currently RRPs for around £600.

There are many cheaper alternatives out there and you may find one that better suits your budget or requirements, but if you are serious about your amplified acoustic sound and if you perform regularly (at least once a week) you are likely never going to find a better amp than the Alpha 40.

It’s sturdy, reliable and highly capable of producing a fine acoustic sound for either your acoustic guitar or a combination of vocals and guitar.

You get what you pay for when you purchase an AER amp.

This review was submitted by Guitar Jar contributor: John