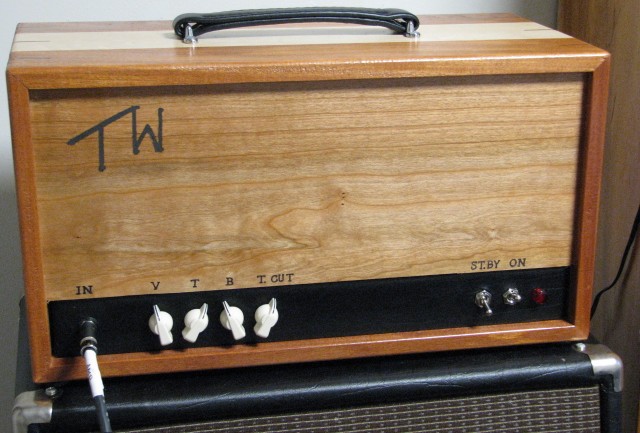 This review was submitted by Guitar Jar contributor: Paul A Hartmann

I had started to look for a “Holy Grail” level amp kit, and learned about the TrainWreck vibe/mystique.

…WOW! What an amp! If you don’t play thrash metal, or stadiums, this could easily be the only amp you need…

Nik, at Ceriatone, offers an extremely clean build, lots of sound and photo samples to get an idea of what your purchasing ahead of time, and simple, honest “I care about your business” interaction even from the other side of the globe.

These are clones by admission, but they are incredibly well built, fairly priced and built true to the designer’s intent.

It’s a TrainWreck Clone. The primary feature is that there really aren’t features. It is a pure, uncluttered circuit, based on an AC-30, but devoid of bells and whistles that may add variety, but also detract from the purity of the amp’s capability, and provide more “things” to break down.

The RockIt! (Rocket) has only 4 knobs. Vol. Treble, Bass and Treble Cut. Nik has added a half power switch, and a plate voltage switch in back so you can tailor you output a tad more than the originals.

Varying the plate voltage moves the amp’s function from class A more into class AB, the way the AC30s perform.

How hard can 4 knobs be. What you need to be able to do as a player/user is utilize your guitar’s controls to vary your sound.

You should be able to find your sweet spot on the amp fairly quickly. You’ll never lack for volume. In fact, you’ll need to find a good attenuator even at half power.

You’ll also need to be willing to do a bit of tube swapping to get your best sound. I used a matched set of JJs and find them to be affordable and balanced sounding.

Nik offers head cabs that look real nice, but I built my own head cabinet and 2×12 speaker cab with a Weber BlueDog/Silver Bell set.

I’ve never played through a real “Wreck”, but this amp is true to Ken Fischer’s design in that if you put garbage in (as a signal) you get garbage out.

If you and your guitar sound good going in, this amp is an absolute thing of beauty.

The treble can tend to stand out, but not to the detriment of the overall tone. As a pro friend of mine said “There isn’t a bad sound in it”.

The original Rocket circuit famously handles effects pedals in front of the amp wonderfully and I can vouch for this.

Filter your DC power in to keep the noise out, and you’ll fall in love with your pedals again.

You don’t need much, though. The straight amp sound has power clarity and POWER. This is the loudest 30 watts I’ve ever tried to stand in front of, all with incredible clarity and definition.

You can dial in and out of sweet crunch with just a modest adjustment of your guitar volume. Rolling off your tone control puts you into jazzer mode. Seriously, all I ever seem to touch on the amp is the “on” switch.

I haven’t had any real trouble with the unit, but there are indications online that anyone who has had a question or issue has had instant and thorough help from Nik.

I had a preamp tube blow after a few weeks use. I wrote Nik and got an immediate e-mail back saying it was an unusual occurrence, but to please try to duplicate the scenario and keep him informed of what happened.

I haven’t blown a tube again, so I’m assuming I had a bad tube from the box.

WOW! What an amp! If you don’t play thrash metal, or stadiums, this could easily be the only amp you need.

This review was submitted by Guitar Jar contributor: Paul A Hartmann