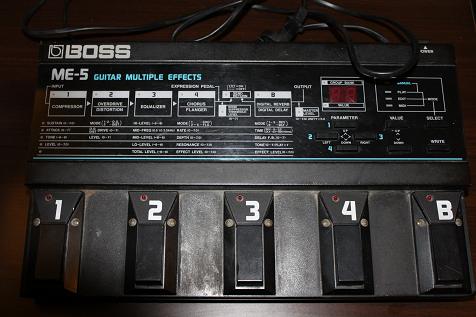 This review was submitted by Guitar Jar contributor: Jimi Photon

I first heard about the BOSS ME-5 in Guitar Player Magazine in the late 80’s and bought my first unit in 1989.

…the original and still the best…

I was intrigued by the idea of a boss pedal multi effect and once I tried it, I realized the brilliance of the unit… and now, 30 years later, recognize it’s STILL brilliant.

It may seem “limited” by today’s Swiss army knife, every sound but the RIGHT one mentality, but there’s deep water here if you dare poke around in them.

I have bought several over the years and currently own two so one is available as a backup in the event of unlikely failure.

In a sleek metal box with a Plexi cover for the control interfaces, you get up to 5 classic boss pedals in one at any one time.

You have compression, classic transparent boss unit here, with a tone control so you can boost the jangle or darken it down to get whatever compressed tone suits your fancy.

Overdrive, the classic BOSS OD-1, with a turbo overdrive or boss distortion choice as well. Here lie many great tones with a few parameter tweaks, pretty much the gamut of all the best classic BOSS distortion tones.

Some may lament the lack of the HM2 type distortions, but these too can be obtained when you add in the next pedal in line, the equalizer.

You can use it standalone (as you can with ANY of the effects in this thing) or you can use it to do additive or subtractive EQ and get a wide range of colours from your guitar.

Simple 3-band with pre-set switchable quasi parametric midrange band choices make it easy to dial in anything from a phat and cheeky blues tone to the spam suckin’ trailer trash mid scooped wall o’ doom the kids all seemed to like a few years back.

Add an analog chorus/flanger with multiple voices and parameters, and enjoy some PHAT analog tones completely unlike the digital crap processors of today, into a noise gate that actually works, and doesn’t destroy your tone.

next, an effects loop, which adds a lot of versatility, and allows you to run you amp’s preamp or your choice of effects inside the unit, after the analog effects so you can have the all-important amp sound seamlessly integrated and things start to get SICK.

Return to the ME-5, and your choice of several reverbs including “gated” which isn’t seen as often these days, and a simple but quite functional 1/2 second of great sounding BOSS delay.

With inputs to step thru banks and groups, add expression and midi, you have an old-school powerhouse.

But perhaps most importantly, you have 5 effect pedal boards completely independent… literally thousands of possibilities.

Most of the later multi-effects offer one “manual mode”…in the ME-5, each of the 64 patches has its own manual mode, where you can turn on or off each effect at your whim. Pretty hip for 1988.

Very easy to use and built like a tank. The editing process is intuitive and easy, and you can access all parameters via front panel or midi, where you can program the unit from your computer.

It sounds great. What’s not to love about classic BOSS pedal tones?

This thing sounds like all the classics, all in one box…the REAL ones, analog (except the reverb/delay) and phat sounding, not like the lame models so prevalent these days.

Think of it as analog modelling. You can get just about any sound you can imagine if you’re creative enough to put the unit to its potential.

If you can get a great sound out of BOSS pedal effects, imagine being able to store them away for future use, at the tap of a toe.

I cannot over simplify how great this unit truly is.

I have had several of these units over the years, and they’re built like a tank.

With simple routine maintenance, other than one being blown up on a gig from bad power, I’ve had to do nothing to the rest.

They work great, every time.

I mean… I’ve been using these units for over 20 years, and they haven’t let me down yet – how’s THAT for some reliability?

The best damn BOSS multi-effects – the original and still the best if you’re a REAL working musician that wants simple reliable expandable versatility at your feet.

This review was submitted by Guitar Jar contributor: Jimi Photon