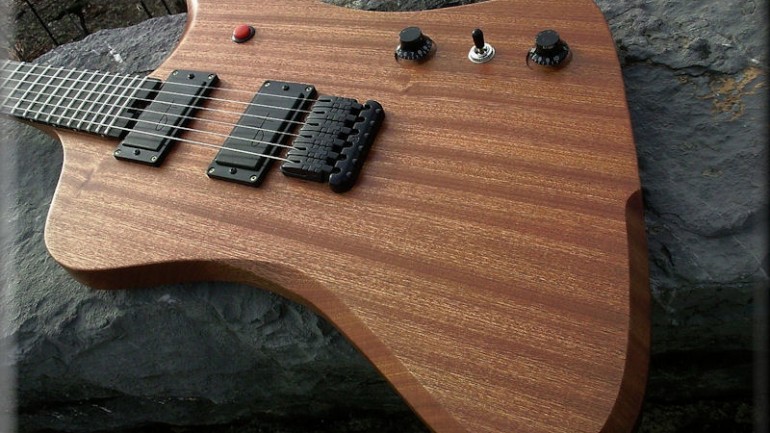 The first time I heard about Patrick (Hufschmid Guitars) was when his website still featured images of Dutch bands using his guitars. In 2010, years later, I was in the market for a new instrument and came across his name on the internet again.

The distressed, slightly minimalistic looks of most of his work appealed to me, and I decided to shoot him an email, which he quickly replied to. We conversed through email and (Skype) phone calls for weeks, until we finally decided to build a spin of the Gibson Firebird, to make up for the hideous Firebird X said company had previously released. A choice none of us would ever regret.

The guitar has 6 strings at a 25.5″ scale, the neck made of sipo, featuring an ebony board. No inlays, just white side dots. A coin shaped piece of anodized metal, engraved with a classy “H” decorates the 3×3 headstock design, equipped with Planet Waves auto-trim locking tuners.

The neck is bolted to a highly figured (“holographic ribbon” pattern as some people tend to call it) piece of Sapele with an AANJ (all-access neck joint) carve. The body itself is a spin on the Gibson Firebird; slightly smaller and a pointy lower horn to give the design a modern accent.

Pickups are hand-wound by Kent Armstrong, known for his jazz pickups. The bridge model is his modern high-gain solution, the Corrosion model, while the neck features a cleaner humbucker, the Rocker model. Both are cased in Patricks dark stained flame maple encasings and installed in a set of black pickup rings (due to supplier issues, matching wooden rings were sadly no longer available).

To the right of the neck pickup, on the lower horn, is a red killswitch, a first for Hufschmid builds. This seems to have sparked a small popularity gain of killswitches, now jokingly dubbed “Nespresso buttons”.

The bridge is a Schaller Hannes, designed by visionary Roland Hannes.

Controls are laid out fairly simple, volume – 3 way toggle – tone. As a nod to the Firebird heritage, we went with bell knobs.

All hardware, as to my request, is black.

It’s a guitar, so plug and play!

Due to the larger body, this guitar is slightly heavier than most (super) Strat models, but not heavy enough to kill your back.

The neck is one of the smoothest and most comfortable ones I’ve had the pleasure of playing so far. It’s about 2mm wider than regular necks and while it looks fatter, it’s thinner than a Gibson and the infamous Schecter “baseball bat” ones. On the lower notes the neck is rounder with much of the “shoulder” removed, slowly transforming into a flatter, classical guitar-like profile near the 9th-12th fret.

Another feature is the ridiculously low action – just low enough to prevent fret buzz, ensuring playing is a smooth experience.

All of the profiling was done based on a drawing of my hand and my build, hence the slightly wider neck matching my bigger hands.

The bridge is nice and large, making it comfortable to rest my picking hand on. The graphite saddles seem to slightly adapt to temperatures, so unlike metal parts they don’t stay icy cold while playing.

Unplugged – surprisingly loud and clear, accompanied by a warm, rumbling low B.

Plugged in – great sound. It (obviously) excels at high gain but with some decent EQ-ing you can dial in any sound you’d like.

As solid as it looks. After having the instrument for nearly half a year, no broken strings, no issues (cosmetical and practical). It hasn’t been taken on-stage yet but I hope to do so some day and judging by how it fares now, no doubt it’ll be reliable as it can be.

There is no perfect instrument and I love my 2008 MCS Templar Starblazer just as much (they’re completely different instruments and both have their uses, though), but once again it comes awfully close to being so.