Nineboys is a guitar brand I had heard about, but never had a close encounter with. So, I was intrigued when asked to review the J17OS, a Jumbo acoustic in Nineboys’ OS (Old Style) range.

…Nineboys have done well with the J17OS. Combining the design, appointments and playability have resulted in a fine instrument that deserves to sell well… 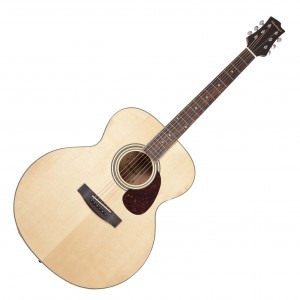 I won’t repeat the guitar spec – it can be found here on the Nineboys website.

First (pleasant) surprise – the Nineboys website shows J17OS comes supplied in either a gig bag or a semi hard case. Our review model came in a conventional full hardcase.

The headstock is distinctive, but unlikely to cause offence. It is pleasantly ‘different’ to being plane rectangular.

Very clean, light coloured solid spruce top. Maple binding on the body and neck – very nice. There is nothing wrong with plastic binding – it’s functional and well defines the boundaries of any guitar. However, I have to confess that I’m a sucker for maple binding.

On the J17OS It’s generally tidy with one or two small imperfections, but you need to remember this is a £329 guitar and not £1000 plus.

The rosewood back and sides are ‘pretty’ if not spectacular. Diamond inlays on the neck added a touch of class and are supplemented by easy to see dot markers on the binding.

Inside, everything is clean, with a few hints of excess glue, but nothing untoward.

The J17OS is not a heavy guitar. I only tried it on my lap as there is only one strap button, but it was quite comfortable. It’s a large guitar, but not overwhelming.

The neck feels good in the hand. It’s quite thin, so the transfer from electric to this guitar would be no trouble. On the other hand, the neck is not so thin that it would be unfamiliar to acoustic guitarists. It’s a good compromise.

Fret ends are tidy and smooth, giving no problems when sliding up and down the neck. Fitting a capo was easy and there were no intonation problems. 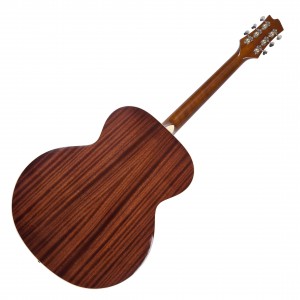 I’ve got to be honest and say that, first strum out of the case and I really didn’t like what I was hearing. The sound was thin and uninspiring. BUT, please read on.

After about an hour the sound gradually transformed. It was ‘chalk and cheese’, separated by an hour. The guitar really opened up.

There was good string separation that, when combined, gave that traditional jumbo wall of sound. There is a good balance across the strings – no single note or string stands out.

The J17OS is not hugely loud and I would describe the overall sound as being ‘safe’ and ‘polite’. There are no extreme tones trying to leap out of the guitar. It is well behaved when both strummed and picked.

Strumming with a light and medium pick is a pleasure. You get the impression that the guitar is working with you. Open chords and barre chords worked well.

Jumbos aren’t normally best suited to picking, but in this case the guitar really rang out. In particular, picking with a capo on the fifth fret gave a wonderfully resonant and full tone. The thinnish neck also lends itself well to lead runs.

Overall, the playing experience was very satisfying, with the J17OS showing itself to be a good all-rounder.

As already mentioned it was pleasant to see a real hard case – tough enough to go into the back of the car with other band ‘stuff’.

I’ve no reason to think that the J17OS would not give long service, as long as it wasn’t thrashed.

It has a good, solid feel despite being quite light.

The gloss finish seems to be quite tough and likely to be durable.

I have to keep pinching myself that this guitar is only £329 (at the time of writing on the Nineboys website).

I certainly wouldn’t be disappointed buying this guitar. If you are going to own a single acoustic guitar in this price range, then the J17OS is a good choice.

I’m surprised to be saying that because Jumbos aren’t naturally ‘one size fits all’ guitars. Something like an OM may be more familiar to apply this phrase to, but in this case, the Jumbo does good. (A smaller frame person may struggle a little because it is a large bodied guitar.)

Nineboys have done well with the J17OS. Combining the design, appointments and playability have resulted in a fine instrument that deserves to sell well.