The Driftwood LP is an instrumental offering from acoustic lap-tapping guitarist, Tony Haven. 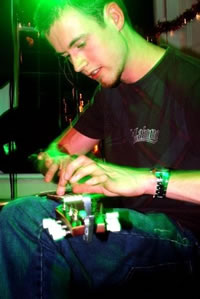 Tony Haven is a busy man. During the last 18 months, he’s released two EP’s, a DVD, and at the time of writing has just embarked on a promotional tour across multiple countries.

The Driftwood LP is a fantastic offering of intellectual, mature & concise guitar playing. The lap-tapping techniques Tony embraces are simply jaw-dropping, from start to finish.

The opening track “Waves” is the perfect start to the album, featuring glorious acoustic tapping throughout. Tony’s tone is fantastic and his Freshman acoustic guitar really sets the scene. The album progresses on in a similar vein; songs such as “Changes” embrace a somewhat folky feel, again oozing with musical embellishments.

“All Roads Lead to Home” keeps the feel of the fast, rhythmical approach to Tony’s song writing, clearly displaying determined guitar playing – this track is an example of how solid Tony is as a guitarist.

There’re a number of more relaxed songs on the album, most noticeably the song “Archives”, along with “Cocoon” and “Pictures in Motion”.

Personally, there are two tracks that really hit the spot with me; “The Hunt” and “Showdown”. The former is quite simply epic. How on earth Tony embarks on playing this live is beyond me – it’s a musical offering that music fans can’t help but acknowledge. Similarly, “Showdown”, the last track on the album, has a much harder approach, featuring excellent blues influenced slides.

I’m a fan of a wide range of music genres and Tony fuses a broad mix of styles and influences. At times I’m hearing folk, classical, blues, rock, dance, and metal, all embellished by acoustic lap-tapping.

Whether you’re a fan of electric or acoustic guitar playing, The Driftwood LP is well worth a listen, but I have a feeling that fans of Tony’s guitar talent will appreciate him more in a “live” setting.