Enochian Theory (pronounced E-KNOW-KEY-AN) is a Portsmouth based progressive rock/metal band. Having formed in 2004 and spending the last five years working extremely hard in promoting their own material, they recently signed a multi album deal with Mascot Records and have released a new album, “Evolution: Creatio EX Nihilio”.

…if they can pull off live what’s on this record, then surely they have to be one of the UK’s leading progressive rock outfits… 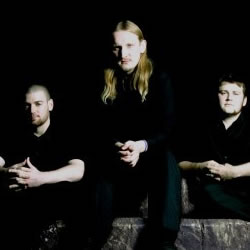 Being firmly placed in the progressive rock/metal genre, listeners can expect to hear influences including Porcupine Tree, Katatonia, Tool and at times, the odd dose of Pink Floyd.

“Evolution: Creatio EX Nihilio” opens with an atmospheric soundscape (something that often appears throughout the duration of the album). The soundscape flows swiftly into “Tedium” which starts with a clean guitar tone whilst showcasing a gentle vocal melody from lead singer Ben Harris-Hayes. The gentle guitar work is short lived however as the song progresses into a very Katatonia-esque melody and song arrangement. It’s a powerful sound with the drums and the bass locked very tightly together.

“The Dimensionless Monologue” is stitched seamlessly to the previous track and is equally as powerful, featuring fantastic guitar playing and vocal arrangements. At this stage into the album, it’s clear that Enochian Theory work extremely hard at what they are trying to achieve and the album shines as full a team effort.

“ T.D.M” features a pleasant acoustic guitar, played over a dark sounding soundscape. This took my imagination to another place entirely as it has a slightly medieval feel to it, reminiscent of early Genesis (think “Selling England” era). This track flows straight into “At Great Odds With…”, which is a powerful song, featuring brilliant dynamics that nods in the direction of Porcupine Tree. So much so, my constant thought throughout this song was how similar the vocals sounded like Steve Wilson.

“Apathia” is more in line to what I expected to hear from this album, featuring a brooding mix of heavy guitar, slow beats and growly vocals. Musically, this progresses into an epic song and was the only track on the record I had to listen to again once it finished. It’s a textbook example of excellent musicianship and dynamics.

“Triumvirate” is a short soundscape that sounds like it’s straight from an “Alien” movie. This moves into “Movement”, a song that starts very gently but again progresses into a full sounding, powerful rock song. The drumming is brilliant on this track as is the guitar work and shows again how diverse this band is. This song is capped by the orchestral “After the Movement”.

The final three songs on the album all share similar qualities; progressive song structures, tight drums & bass and atmospheric keyboards. In particular, “The Fire Around the Lotus” is a 7 minute masterpiece of pure progressive rock.

If you enjoy a bit of prog, you can’t go wrong with “Evolution: Creatio EX Nihilio”. It’s a rock album that in my mind is so dynamic and diverse, it could potentially appeal to a wide ranging audience. Enochian Theory is a group of extremely creative and highly talented individuals and it’s clear to see that the band are hard working, putting in a serious amount of time and effort to write the material, ensuring they work closely as a unit.

The only additional comment I can make is that I wish there were more guitar solos on the album. The guitar playing is tastefully played throughout, but there were times when I was urging for a solo to kick into gear.

My man of the match award is shared on this album between the drummer, Sam Street and the production team.  The production of the album is fantastic throughout, where all instruments can be clearly heard in detail. It turns out the album was mixed and mastered by David Castillo who’s previously worked with Katatonia, Opeth, Bloodbath and InMe.

Overall, Enochian Theory have provided music fans an intriguing and highly enjoyable listening experience. The next step for me is to see the band live; if they can pull off live what’s on this record, then surely they have to be one of the UK’s leading progressive rock outfits.