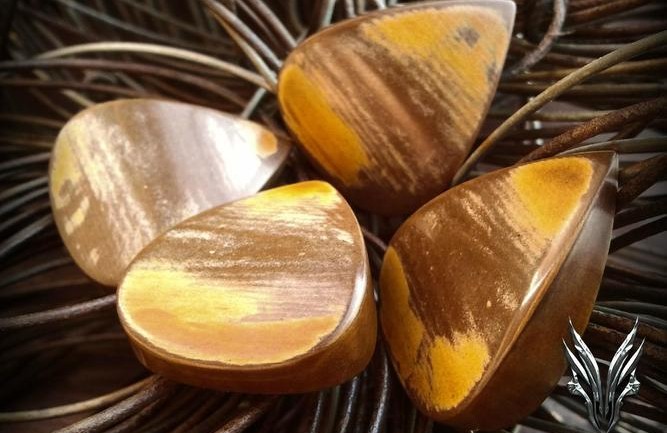 This review was submitted by Guitar Jar contributor: Jeff

…while I have no idea what “PHD” is, or some of the other materials Patrick Hufschmid uses, it’s REALLY, REALLY tough… 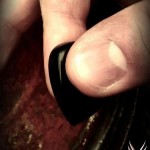 Of course, there are a thousand varieties of mass-produced picks. If picks didn’t sound or play differently, there’d just be one kind of pick and that would be the end of it.

So it should be a given that we all agree that picks make a difference. It’s just a matter of whether you’re happy with some of the ones churned out in the tens of thousands, or whether you’re compelled to try something cool, new, conceived to stand out sharply from mass-produced picks.

In no particular order:

Very ergonomic shapes. All of the “Drop” style picks are shaped in almost a wave form, with a thicker middle but tapering to the point and to the back as well. I’ve used all three varieties of the Drop, in several materials, and each one is really comfortable to hold.

It takes a short time to get used to their size and shape, but you will be surprised at how quickly that time passes, and you start enjoying the way they sit against your grip.

I’ve used them in traditional thumb-pad and index knuckle grip, but they work well for more forward grips or even the EVH-style three finger grip. There’s plenty of surface to grab onto, which leads me to…

Extraordinary control. If you think a larger pick means harder to play, think again. More on that later 🙂

Durability. While I have no idea what “PHD” is, or some of the other materials Patrick Hufschmid uses, it’s REALLY, REALLY tough. Even the least tough PHD stuff can be banged together in block-form with extraordinary force and not even have a ding. It’s… pretty nuts! I’ve seen it or I wouldn’t be reporting on that aspect of it. Suffice it to say the picks keep their bevel just fine.

And finally, variety! There are four different kinds of Hufschmid drop shapes:

In addition to the PHD material, he has made a bunch of them in different experimental materials. If you go to his Facebook page you can see some of the other work he’s done.

Different materials kind of come and go from the lineup, depending on what he’s playing with at the moment.

If you’re lucky, you might win a one-of-a-kind plectrum. I got lucky before, and it’s a treat to have something that nobody else has 🙂 But you should see some of the beauties he’s had made in the past. I wish they were part of the lineup, but then I’d go broke. Hah.

All of the drops are EXTREMELY comfortable to hold and to play with. I noted there is an adjustment period to the thickness and shape of them, and that’s true – but once you’ve made it through that adjustment, which won’t be long, you’ll be ripping with whichever plectrum you pick. (Pun intended?… Ahem)

For a first-time buyer I would recommend either the Attack Drop or the regular Drop shape. If you have hand pain when you play and it’s not a technique issue, then go right for the Gigantic Drop and it could really help relieve that.

Not guaranteed to, I guess, but it’s extremely comfortable to me and acts as a sort of force multiplier because of its size. All you need to focus on is playing with precision, it takes care of the power for you.

The funny thing here is that if you talk to Patrick, he might tell you there’s no difference in sound quality, but I own a bunch of these things and a bunch of other picks and I would swear on my life that the different shapes DO impart different qualities to the sound, by the nature of how they impact the strings and how they lend themselves more to this or that technique.

E.g. the Gigantic Drop is massive, so it’s got more attack/transient noise than a regular Drop which has less mass behind the pick.

Of course no pick plays itself, and the acoustic response of your guitar (electric or otherwise) is vital… A pick contributes to the overall sound but doesn’t determine it. All factors are at work.

TOUGH. To cut them he uses a bandsaw. Eventually the internal workings blew up. Seriously. This is tough stuff and the picks seem extremely resistant to wear.

Of course anything, over time, is going to wear down unless it’s harder than the strings themselves. That’s just physics. Nothing lasts forever. But there’s definitely a MASSIVE difference in durability compared to a sub-1mm soft nylon pick, for example, not to mention you could use this stuff to hammer a stage together…

I love these picks! They’re extremely cool, they play great, they sound great, they last, and each is a work of art.

They aren’t cheap, but they’re made one at a time by an artisan, not punched out in the thousands an hour by machines. You can choose to reward that or not, of course, but I think it’s well worth it.

This review was submitted by Guitar Jar contributor: Jeff