I bought this guitar in 1979 from ESS Music in Barnet High Street (London, UK).  I think it may well be a Digital Village shop now.  I was a spotty youth of 16/17 and I’d saved and saved to get this.  It was £229 and I still have the receipt. I didn’t even play it before I bought it; if it was good enough for Jimi, it was good enough for me.

The choices back then seemed easier:  trem or hard-tail, rosewood or maple neck.  That was it.  Mine is a trem version with rosewood doing its duty on the fretboard. Three standard pickups and the good old single volume and two tone controls.  In my early days I removed the three position switch and replaced it with three mini toggles.  Other than that the guitar is 100% original.  Oh and schaller straplocks of course. I love the headstock and those F tuners.

Oh, this beauty plays like butter.  Maybe it’s because I’ve been playing it for 30+ years and my fingers have grown to love it but I don’t it’s just that.  The action is perfect, the frets are just beautiful and the sound, is, well, 70’s Strat. This thing takes your playing and makes it better somehow.  When you play it you don’t want to stop.

I had the frets dressed about 20 years ago as I’d played it so much but that was only a minor job.  The frets are slightly flatter than the originals but that just adds to the playability.

Of course with the three toggle switches replacing the three way switch I can do a few more combinations of pickups and sounds.  And the middle switch also acts as a phase switch so I can switch the phase of the middle pickup in and out.  So a few more sounds there too.

The trem was very quickly “blocked”; one broken string and the whole thing is out of tune so I adjusted it so it no longer floats.  And unlike Jimi or Eddie, I could never really get the hang of the trem unless I wanted to sound like Hank (and I didn’t.  No offence Hank). Being a Strat it is prone to electrical noise pickup despite me shielding the pickup cavities some years ago but I can live with that.

What do you say about the sound of a 70’s Strat other than “perfect”. 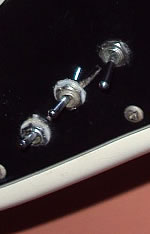 This guitar has been gigged and gigged and gigged.  Apart from the odd broken string it has never let me down.  It looks a bit worse for wear round the back where those fashionable bullet-belts we wore in the 70’s and 80’s did some damage.  But other than that this guitar will just keep going and going. The finish has dulled over the years but I think it gives the guitar a sense of maturity.  And the wood on the headstock looks so, well, yummy.

I’ve owned this guitar for so long it is part of me.  I don’t gig it much anymore, although I did gig it last year for the Motel Kings reunion gig and really enjoyed playing it live again.  I still record with it when I can because every guitar deserves to be played and used to make music. It’s a testament to Leo that the guitar he designed over 50 years ago hasn’t really changed at all.