The guitarists and music from Laurel Canyon

If you’re anything like me, there are times when a particular song or an album seems to take over your thoughts, almost defining that particular moment of your stage in life. I guess you could call it a temporary addiction or even an obsession.

…Stills & Krieger… I’m in awe of their guitar talent, leading the songs to new tangents and musical journeys… 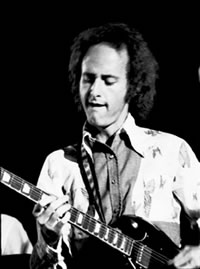 This has happened to me on numerous occasions throughout the past 15-20 years. It probably started with a fixation of the early Queen albums, followed by a healthy dose of Pink Floyd and many more bands and solo acts.

One of these moments occurred around 10 years ago when my parents sold the family home and I somehow acquired a load of blank videos that I believe were left behind by my sister. It turns out the tapes were littered with music documentaries and gigs including the famous Hendrix live at Monterey performance and the full uncut version of Woodstock the Movie. It was the Woodstock movie that captured my attention the most, to the point where I watched it repeatedly, time and time again over many weeks, almost wearing out the tape.

The Woodstock film is exactly the kind of documentary I like; fusing elements of music, history, interviews, opinions and ground breaking live performances that in my mind are some of the best I’ve seen on tape or DVD (Richie Havens, The Who, Hendrix for example) but it was the performance by Crosby, Stills & Nash that completely blew me away. I’ve always leaned towards music that thinks “outside the box” and that era had it in bucket loads. I’ve often mentioned to friends how much I would’ve loved to been a teenager during the late 1960’s, to have experienced the psychedelic/hippy/early rock music scene in full flight – but I seriously think I wouldn’t be alive now if I had!

I was amazed by the Crosby, Stills and Nash Woodstock performance of “Wooden Ships”. Their harmonies were stunning, the guitar playing seemed unconventional and the apocalyptic theme of the song captured my imagination. So began another obsession, diving into the Crosby Stills & Nash (& Young) back catalogue, wanting to know everything I could about the individual band members and their musical past.

This unlocked a whole music scene that I wasn’t entirely aware of, a scene in the late 60’s & early 70’s that was heaving with incredibly talented and influential songwriters & musicians. This all crept out of a Los Angeles district called Laurel Canyon and is potentially responsible for the emergence of some of the 20th Century’s finest musicians, such as Joni Mitchell, Graham Nash, Frank Zappa, Carole King, The Mamas and The Papas, Brian Wilson, The Byrds, The Eagles, Jackson Browne, the list goes on…

Why was Laurel Canyon an epicentre for this musical development? Was it the vibe? The drugs and partying? I’m not too sure. Regardless of the reasons of the abundance of creativity in Laurel Canyon during the 60’s & 70’s, I’m so grateful to the artists who got together, jammed and produced in my mind, some of the finest albums to date.

The guitar playing world can’t ignore the creativity that flowed from that suburb during this period – some of the most creative guitarists have lived in Laurel Canyon at some point. Personally, the Canyon guitarists that I’ve enjoyed the most, or have been influenced by the most are probably Joni Mitchell, Frank Zappa, Neil Young, Stephen Stills and Robby Krieger. In particular Stills & Krieger – the majority of the time when I hear their guitar playing, I’m in awe of their guitar talent, leading songs to new tangents and musical journeys – something I think is the meat on the bones to why I wanted to play the guitar in the first place.

The music scene and the guitarists that lived and played in Laurel Canyon have possibly influenced me more than any other.  I’m not an expert by any means about the Laurel Canyon music scene but I’m keen to know more about the bands and guitarists that emerged from this period – especially those acts that didn’t really make it big in the “mainstream” but produced some equally creative and inspired music.

Have you been influenced by the music that came from the Laurel Canyon scene in the late 1960’s & early 1970’s? Do you know of any Laurel Canyon guitarists or bands that didn’t quite break into the mainstream but are worth exploring? Share your thoughts below.