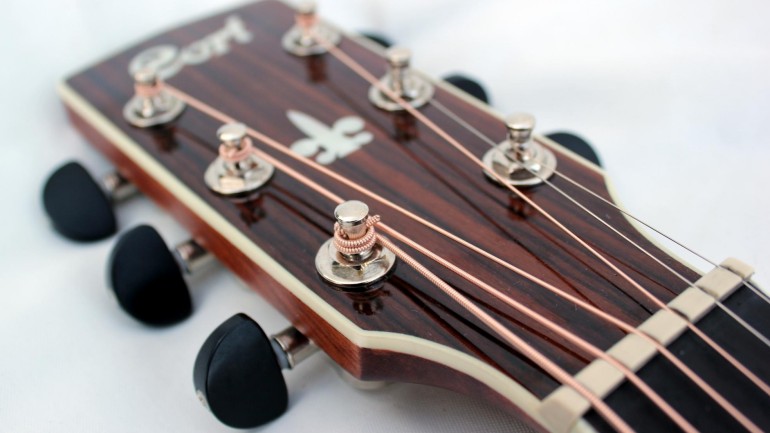 Two guitars arrived recently at Guitar Jar HQ for review from those nice people at Guitar Mania in Parkstone, UK.

…There’s no doubting that both of these instruments are good guitars, but taking account of their price, they are both remarkable…

They’re both acoustics from Cort Guitars, the South Korean company that is one of the largest guitar manufacturers in the world (http://www.cortguitars.com/uk).

For review purposes it’s good to have two guitars from the same stable because they can be reviewed against each other as well as against others in the market place.

Also they’re both the same style – dreadnaughts – but at different price points, so that also gives a good point for comparison.

You can see from the photos that there are several immediate similarities between these two acoustic only dreadnaught guitars.

So what have we got?

It’s basic, but there’s nothing missing. Spruce top and mahogany back and sides (I assume that all are laminated). Simple black binding, diecast tuners, 012 to 052 strings. Satin finish.

No complaints on the quality of construction.

Internally it’s very clean. Externally its ‘no frills’, the guitar is simply functional and attractive. There’s just a single strap button at the base.

Decals are cleanly applied on the headstock (name and emblem) and around the rosette.

It appears that all the investment in this instrument has gone into making a playable, good sounding guitar rather anything fancy. On that basis, it’s paid off.

This is very different to the AD810.

The traditional combination of spruce, mahogany and white binding create a pleasing sight. This is enhanced by a clean hard high gloss finish. There are two strap buttons which would indicate this is more aimed at the performance (standing) guitarist. The strings are high quality D’Addario EXP16 (12 to 53). Bone nut and saddle. Again, very clean inside.

This guitar is a bit of a Frankenstein in that you can see elements of other guitars coming together. Not surprisingly, the body outline is similar to a Martin dreadnaught.

The soundhole rosette is a wood core with two abalone rings – very similar to the Lakewood 32 Series. The headstock emblem and the backstrip are not very different from some Collings guitars.

However, this Frankenstein has turned out to be an attractive ‘monster’ (dreadnaughts are pretty big!). Personally speaking, I am drawn to that rosette.

Both guitars have clean fret ends, so no playing discomfort when moving around the neck.

The as-supplied action on both guitars is almost identical. Its medium height enables easy fretting all along the neck, but no buzzing when strummed hard.

Both necks are stain-finished mahogany, but here the two guitars diverge. The neck on the AD810 is marginally thicker by comparison with the Earth 200, but never the less, quite playable.

I’ve got small hands and it was no problem playing chords all the way up the neck.

These are both dreadnaughts so may be a little uncomfortable for smaller players.

Features and Ease of Use are both important, but what I’m really interested in is ‘what does it sound like’.

I A/B’d them against each other and against other dreadnaughts and jumbos, mostly more expensive than the Corts.

The AD810 is very articulate. It has a bright, bordering on brittle, sound. This may be appealing to an electric player, but possibly a little overpowering for the acoustic community. It’s not sophisticated, but it doesn’t pretend to be and for £109 there are no complaints. The bass is a little light, but these are all minor comments against what is an overall satisfying sound.

A more rounded (but definitely not dull) sound comes from the Earth 200. It exudes class and stands up very well against more expensive instruments. There is typical dreadnaught bass, supplemented by mellow mids and a well-balanced treble contribution.

Strumming, hard or soft, gives a well-rounded ‘wall of rhythm’. I enjoyed picking and lead work at all frequencies. No single string or note trumped the others, so you can be confident again in a well-balanced and powerful projection.

Being dreadnaughts, both guitars are expected to perform well and sound great when strummed – and they do.

The concern is that they will fail to deliver when played with a lighter touch (picking). No worries – they both do well, but lead lines sounded a bit thinner when working up the AD810 neck, compared to the Earth 200.

They’re both loud instruments – which is reassuring as they are both acoustic only. No shrinking violets here.

These days, my capo is seeing more and more use. So I was interested to see how these Corts responded to some Shubb action. Again, no complaints from either guitar.

Both guitars are new, but I can see no reason why they shouldn’t give many years of honest service.

Neither come with hard case or gigbag, but either would be recommended if they were to become gigging instruments.

There’s no doubting that both of these instruments are good guitars, but taking account of their price, they are both remarkable.

No-one paying this kind of money for these instruments should be disappointed.

There have been massive strides forward in the last few years that have enabled high quality guitars to be designed, built and sold at such reasonable prices. Also, the quality reputation of instruments made in the Far-East suggests that these two were not handpicked one-offs, but that you could pick up the same model anywhere and be confident that they would be equally good.

Off course the shop conditions have some influence and I know that Guitar Mania take their retail environment seriously, so that guitars get to the customer in the best condition possible.

What we have in these two guitars are a perfectly focussed entry level dreadnaught and its natural successor if you look upward to the next level of quality.

The AD810 would satisfy the beginner for some time, but also serve well for an electric player who wanted to explore acoustic delights. The occasional player could keep this guitar for a long time and not be dissatisfied.

The Earth 200 is where quality kicks in. It can hold its own against many guitars costing twice the price or more.

The intermediate player would be well-served by this guitar and someone playing high-end guitars could buy this as a reliable backup without feeling it was a second class instrument. Who knows, with time the Earth 200 may open up and mature to supersede the performance of some more exotic and costly first choice instruments.

All in all both guitars are a revelation and thoroughly recommended.

They deserve to sell well and will provide a high quality / high value guitar playing experience for years to come.