This review was submitted by Guitar Jar contributor: Ben Jambon

Spanish Luthier Antonio Sánchez builds high quality classical and flamenco guitars. Please read my overall rating of this product for the reasons for purchase and a pass at a review of this hand made solid top classic from Spain. 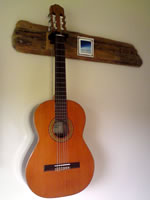 Mr. Sánchez personally selects the various tone woods as well as supervising the critical natural drying process which can last more than 12 months.

No fret markers.. pfft! – no offence intended to the classic lovers out there! Tuning accuracy and holding is excellent. Action now raising slightly 6 years on. Manageable.

Resonance and sustain is utterly sublime.

Travels / ranges well over grassy fields and resounds many times in rooms up to small hall size; 6 years on this is still consistent and bold throughout the frets on all strings.

It is full and rich through a Fishman real earth humbucker.

Holds well; would purchase the steel supported neck if had the option to do it again. Finish is good for impact but high gloss so fine marks easliy as a result.

Took a field trip to Hungary as part of a Uni course; while studying real hard, I set about picking up something that would be both a bargain and a little bit special (not an eastern European lass – alas but a fine stock classic guitar).

One day, not wishing to parade another technology centre, a ‘friend’ suggested we take a day off. So some of us disappeared on the train to Slovakia. After considerable ‘border tax’ payments and witnessing Arab glue sniffing for the first time (messy) we got off at the commy station.

The place was superb; very phunky – crazy shred and / or orchestral sounds coming out of most record shops. As concerns grew over who / what / why /was the KGB esque mystery mullet man following us everywhere we attempted to lose him by splitting up. So I went hunting. Found four shops in all and prices were approx 10% less cost than the same items over here. Surprisingly Including Fenders; Gibson’s; Ibanez etc

You know how something just drops into place. Very rare indeed. In one particular shop you could hear rude violin all the way down the cobble street as you approached. It was tiny and fine instruments packed to the ceiling with all the ‘class’ hanging from ceiling hooks and out of reach.

So I enjoyed the Violin CD they had on and hung around touching things while expected some attention. Nothing. I picked up a banjo mandolin and tinkered – still not a soul in site; had a tinker on some crazy sounding wood based percussion instruments.

There were three full sized and clearly solid top cedar acoustics hanging in the corner; as I approached the proprietor walked out from behind a screen. The guy was pale as a Victorian princess with Bow Hair and Rosin all over his black blazer top (It had piled up and fell off his shoulder) with a darkness under his eyes only present in new born parents and an artist who is so near to realisation that space and time are no longer of consequence.

He abruptly stopped playing violin and I apologised. He looked back blank – he was in full flow. I smiled and said how wicked his playing was and that I thought it was a CD and all that stuff.

He looked back trying to smile offering yet another blank expression. So I pointed to the ceiling doing some sort of air guitar while pointing to my pocket (like Travolta in Saturday night fever). It was clear this would be a sale free sell as both of us muttered things like oooh and ummm and ackh through the first two guitars one at a time tuning and tinkering.

Then he put one on his lap; put his finger to his lips (to which I duly stopped breathing) and plucked the ‘E’ string. The room was so full of stringed instruments that you could hear the note bounce inside a nearby cello.

Then he picked up the third guitar – indicating it was the most expensive by doing the slap pocket thing like on the old asda advert. He did the same as before, I responded in silence; poised and he plucked the top ‘E’. What happened next is no good for words. Like free falling or something. The resonance had made things very clear. I felt I could hear it bouncing in every other instrument in the shop. It was one note; fully resounding and sustaining a period of what felt like 40 seconds plus; early in the note, I could hear it coming from 4 or five instruments of various sizes located nearby.

I became immediately lonely in one single tone – no further discussion necessary. By this time chitter-chatter was not on the cards anyhow. Observing my facial expression he handed it over, I picked and strummed then messed up and hurriedly handed it back to hear a master tinkerer. He knew exactly what had just happened. Nervously I asked for a price (by rubbing thumb and index finger together).

He gave me numbers on a calculator in Slovak Koruna so I typed in a lower price – having very little idea where we’d started from. By the time we were done I had also bought a proper Anvil hard case in lieu of a road runner polyfoam case and he threw in new D’Addario strings. He was definitely pleased as he started closing the shop as I was leaving. All in all it took an hour. I walked out of there floating. On the way back I had a bit of bother at the airport as the hard case absolutely wretchedly stank of some form of highly modified drug based substance. I assume it was the glue in the lining to the case. All in all the case and guitar were just short of £360.00

6 years on it holds well, is a wonderfully rewarding instrument; incalculable in its horizons and a bloody nightmare on a bad day but we make up good…. Next time I’ll buy one with fret markers. It’s maybe not a drinking guitar!

Thanks for the site and to anyone reading. Positive vibrations. Gowaan Guitar Jar!

This review was submitted by Guitar Jar contributor: Ben Jambon