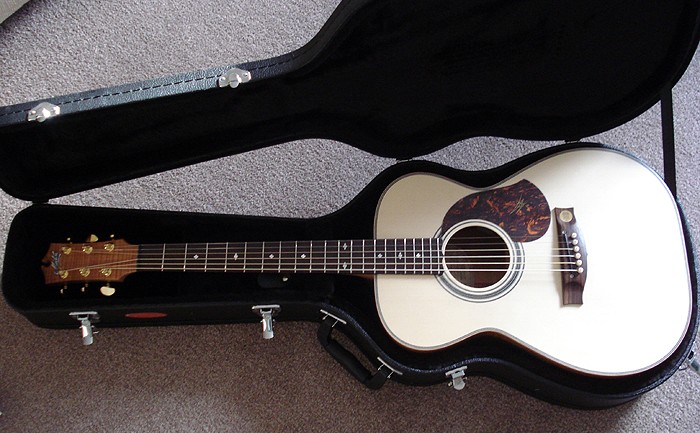 This review was submitted by Guitar Jar contributor: John Tracey

This was my first all-solid acoustic guitar which I bought in 2007, inspired by the great onstage sound of players such as Tommy Emmanuel, Gareth Pearson, Michael Fix and Joe Robinson, who all play Maton EBG808 models.

…if you’re a performing musician and you demand the very best in terms of playability and sound quality when you’re onstage, check out this guitar…

Maton have a few variations in their EBG808 series in terms of different tonewoods, different quality woods used, and also in the electronics, with the Artist (the one I’m reviewing) and the TE model being the top-of-the-range models in the series.

The EBG808 Artist is a concert-sized guitar, comprising a solid AAA-grade Sitka Spruce top, solid AAA-grade Australian Blackwood back/sides, rosewood fingerboard and Queensland maple neck. Quite a handsome guitar, no frills or bells and whistles or anything sparkly. The headstock features a keyhole cut-out, but that’s about as special the Artist gets aesthetically.

It includes the ground-breaking Maton pickup system, the “APMic”, which is an onboard preamp and Piezo system which includes a blendable internal mic, all of which comes as standard and works straight out of the box. It’s this guitar’s trump card. Just plug a cable into the guitar and the other end into an amp or PA desk, etc, and you have the world’s finest “plugged-in” acoustic guitar sound in existence, with very little tweaking needed. No other pickup system has come close to the natural sound of Maton’s, it’s really that good.

The added internal mic really sweetens the traditionally troublesome mid-range and makes the overall sound natural and as dynamic as is needed. Strumming a powerful rock song? No problem – turn the mids way down. Fingerpicking a sweet ballad? No problem – crank up the mic and mids. Want to sound like Andy McKee playing ‘Drifting’? Just hit the guitar’s body – everything is picked up by the electronics. Sounds awesome every time.

Many people are of the opinion that Maton guitars are really comfortable and a joy to play, and I’d agree with them. They aren’t my absolute favourite model of guitar, but I’ve become so accustomed to the nature and ‘feel’ of these guitars that I feel right at home with my Matons.

My 808 Artist is my main gigging guitar and I don’t think I’d feel as comfortable onstage with another guitar as I do with this one. It’s remarkably robust, a testament to Maton’s fine guitar-building, and it performs superbly in every live situation. I plug it into my amp and I just know it’ll do its job perfectly every time.

This leads me to my next point – I do not recommend this guitar if you aren’t a performing artist.

The Maton EBG808 series (and Maton guitars in general), in my opinion, is not the best guitar if you are planning to play acoustically unplugged most of the time, as its acoustic sound is quite underwhelming and uninspiring.

If you are a fingerstyle player like me, you’ll likely have the action set nice and low, which further lowers a guitar’s projection and tone, which means that the poor ‘808 just gets drowned out at parties, gatherings, jamming sessions, etc. The bass becomes non-existent, for example.

I’ve brought it along to unplugged impromptu events and people have said to me “can’t you play a bit louder?” more times than I can remember. No matter how much you dig in, it’s not up to par. But of course, bring a jumbo to the party and people are asking you to turn it down!

With a jumbo you have that flexibility and dynamic, with the modest concert-sized 808 Artist, your hands are tied to its lacklustre ability to sound decent (without plugging into something).

Acoustically, the Artist has a really ‘woody’ voice; quite a transparent, natural tone, like you just know it’s made of wood. No warmth or depth of sound really. The bass is very well-defined (a bit too well-defined), the mids are super punchy and actually not harsh at all (great for lead) and the trebles are just fine, too.

The Sitka spruce top is very capable of handling the mids and highs, and the Aussie blackwood (apart from being quite nice to look at!) provides a clarity that, unfortunately, is underwhelmed in this particular model.

Intonation is great all the way up the neck, as expected, and I’ve yet to have a problem with tuning, etc.

That aside, I’ve played other guitars of a similar size and they pretty much all outshine my 808 in terms of projection and acoustic tone. Must be a Maton thing.

To sum up – do not look past this guitar if you play amplified gigs regularly as it’s likely your best bet, but walk straight past if you need something acoustically explosive and full of character.

As I’ve said, Maton guitars are 100% reliable. They’re seriously built to last! These are not your poncy acoustics that spend their lives in their cases for fear of a ding in the finish – these are workhorse guitars made to be played, and will be there to perform time after time until the last splinter of wood collapses from the body (see Tommy Emmanuel).

I gig with two Matons, and I can count on them without backups – I never have to think twice about it. I’ve battered and bruised it in the past few years and it’s already had a full refret, but it keeps on going.

Into my fifth year of owning this guitar, I’m really pleased with it overall. It’s yet to let me down, and it’s brought me a huge amount of joy on and off the stage, in recording studios (it records magnificently) and at home.

Not the prettiest guitar, not the sweetest acoustic sound, but still the best choice for the working musician. The plugged-in sound is killer.

Bottom line from me – if you’re a performing musician and you demand the very best in terms of playability and sound quality when you’re onstage, check out this guitar.

Listen to other players of the 808 Artist (or 808TE – virtually the same model as the Artist) and make your own judgement, and get your hands on one if possible to see if it meets your requirements.

Should you like what you see and hear, you are guaranteed a faithful and capable companion for a long, long time, and it’ll be “that” guitar in your inventory that just keeps on giving.

This review was submitted by Guitar Jar contributor: John Tracey