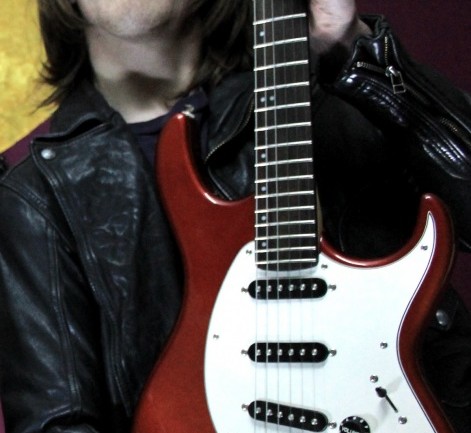 This review was submitted by Guitar Jar contributor: Roman

I am from the Ukraine and I was trained as a classical pianist and had a short course of Spanish guitar, but I never played electric guitar, even more – I never held one in my hands.

…I wish I was Eric Clapton… 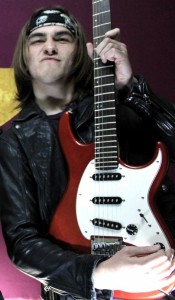 But after listening to some Deep Purple I was determined to get one and give it a shot.

Since I had no guitarists around my friends, I started my search via internet. After ton of reviews and opinions I set my mind on Cort G200; a cheap Indonesian Stratocaster clone for around $150.

I was looking for cheap but new instrument for the total beginner, and I got one.

My dealer said the Cort G200 has a basswood body and a maple neck. I say… well I am not sure about basswood body, I’d never drilled it, but maple neck seems true.

Since it is a Strat rip off – three passive Power Sound pickups and Full Action II bridge come as no surprise. Bloody red body with a white pickguard looks wicked for the $150.

Paint job is really good, no doubt about it. I actually wanted Arctic White colour, but there was none of it in a whole country at the moment, so I settled for a Red Metallic variation.

And of course volume and tone control knobs and 5-position pickups switch – what more you can ask?

The strongest side of this guitar, in my opinion, is the neck. It is really comfortable to play.

I realised it from the very first moment, and in retrospective – it is really good.

The other strong side is that guitar stays in tune for relatively long time.

If you don’t go postal with a whammy bar, or do some crazy bend action – tuning up a guitar is not a problem at all.

There are some opinions on the internet that there is a pain in the rear end about tuning up cheap guitars with a tremolo bar, but it’s not true about Cort G200.

You can even add some distortion and it sounds almost like Slash in the intro of the Back From Cali song with my Behringer GM108 amp (if you can believe that).

But the problem begins with the highly distorted sound. It just breaks up, no edge in the sound.

Maybe it can work with some punk or grunge, but for metal or hard rock rhythm it just isn’t right.

But once again it’s a $150 dollar guitar and for the shot in the dark of buying it, really great clean bluesy sound is a blast. I wish I was Eric Clapton.

I’ve played t5he Cort G200 for around two years now, and the second fret of the G string is in really bad shape.

I never liked the A note more than the other notes, so I guess it’s just bad material for the fret.

But I have no other issues, everything is good – pickups, tremolo, tuning pegs.

Wait, once I played my Cort with the huge Marshall stack in the studio with my oh-so-punk band, and my guitar started catching some radio show. It was quietly broadcasted through the Marshall.

The other guitarist, who played Epiphone just laughed, and I felt awkward. It can be bonus function of the Cort G200, I don’t know for sure. But as an antenna, the Cort really works!

Overall the Cort G200 is a really good guitar for a beginner. My Cort is better than some cheap Ibanez guitars for a bigger price.

The 52’string is big for the nut, but still fits. It got me some rich bass.

I’m looking forward to buy used Fender as my next level guitar, but I have no regrets playing Cort G200.

This review was submitted by Guitar Jar contributor: Roman