On a recent trip to The Guitar Store in Southampton (strapped with birthday cash), I found myself on a tonal quest for an overdrive pedal.

I’m very particular about overdrive pedals – one of the main requirements I have is the pedal must retain the natural sound of the amplifier as much as possible. 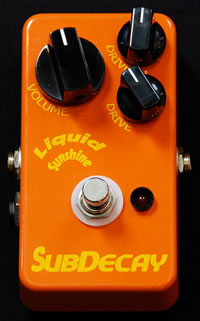 The Subdecay Liquid Sunshine is a handmade, JFET Class A overdrive. It differs somewhat from its counterparts as it doesn’t feature a tone control, but don’t let that put you off – the additional features of the pedal are highly versatile.

This pedal can be used as a boost (even a Treble Boost) or as an out and out overdrive unit. The lack of a tone control makes way for two separate drive controls; the top dial adding gain that spans the full frequency range, whereas the bottom dial simply boosts the midrange and treble frequencies, resulting in a highly flexible overdrive unit.

It’s worth mentioning that when adjusting the bottom drive control, scratching is heard, but that’s just the way it works, similar to controls found on ZVEX pedals.

In addition to the top mounted controls, the pedal boasts further flexibility by providing the ability for guitarists to adjust the bass & treble settings by the use of internal switches.

As expected, the pedal is true bypass and is powered by 9V (mains or battery).

Despite the fact this pedal features two drive controls (each focussed on particular frequency ranges), it’s surprisingly easy to dial in a good sound, almost instantly.

Initially, I experimented by boosting the volume control and dialling back the drive, then moved to a Treble Boost setting (which was great fun!), before settling on a solid overdrive sound.

The flexibility of the two drive controls do not disappoint – you can dial in an overdrive tone that either matches the natural sound of your amp or boosts the midrange/treble. I didn’t adjust the internal pots though – I usually embrace the “If it’s not broke, don’t fix it” mentality!

The sound quality is what attracted me to this pedal. In the guitar store, I was fortunate enough to A/B test the Liquid Sunshine against a Fulltone OCD and the former, (in my opinion) won hands down.

The reason for this was simply down to the tone and overdrive “feel” from the pedal – the Liquid Sunshine is one of the most “amp like” overdrive pedals I’ve ever heard. The tones are smooth and warm, and the way the pedal reacts to changes in the guitar volume control is fantastic. The Fulltone OCD just didn’t sound as good – it sounded “fake” in comparison.

I had loads of fun when using the pedal as a Treble Boost – using my SG Standard into the Vintage/Modern, I indulged in my own butchered renditions of “Sweet Leaf” and “War Pigs”.

Don’t expect this pedal to be a high gain overdrive – it’s provides a good, solid overdrive that works extremely well in conjunction with the guitar volume.

So far so good – it’s built like a tank, as expected from most boutique pedal builders these days.

If you love the sound of a driven tube amp, but you’re looking for a pedal to do the hard work by providing authentic overdrive tones, you really can’t go wrong with the Liquid Sunshine.

In my opinion, it blew the Fulltone OCD out of the water, mainly down to the authenticity of the overdrive and the flexibility provided from the dual drive controls.