From time to time, you stumble across a website or an article that really catches your eye. Recently, I came across http://pedalboardplanner.com/ – a site that allows you to create a virtual pedalboard, selecting from a range of pedals that will leave you in a cold sweat, suffering from a serious case of Guitar Acquisition Syndrome.

Johnny Matthews is a clever guy and the brains behind the Pedalboard Planner. Essentially, website visitors can assemble their dream pedalboard, selecting pedals from a huge array of vendors, changing the order of effects, even changing the size of the board the effects are mounted on.

In usual Guitar Jar style, it felt only correct to chat with Johnny, picking his brains about the origins of http://pedalboardplanner.com/ and what he’s got in line for future developments.

So, without further ado, here are the Pedalboard Planner images for both Johnny’s and Guitar Jar. 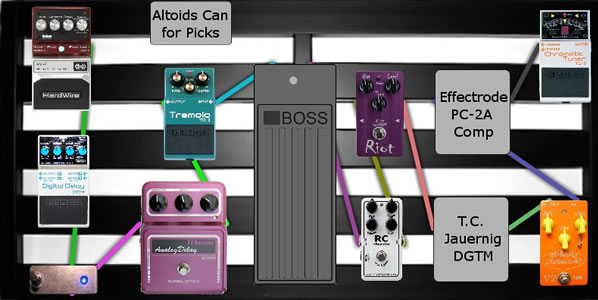 I’ve mentioned a fair few times that I don’t even use a board at the moment, but I couldn’t resist sticking a few of my favourite pedals on there; in particular I’m partial to the Cusack Screamer, the ZVEX SHO and the HBE Big D. The Keeley Compressor would probably be switched on all the time too.

I’ve spent ages on the Pedalboard Planner site (I’m so going to get the sack!). It gives me the opportunity to plan out fantasy pedalboards, giving me an idea of what the board will look like. The only thing I would say about the site; I’m so pleased there isn’t a “Buy this board now!” button…