The EHX Big Muff Pi is a distortion/fuzz pedal that has been around, in various guises, for decades with many recognised guitarists having had used one at some point in their career; David Gilmour, Carlos Santana, Billy Corgan & Jack White to name just a few.

…A good solid pedal, at a low price, that has ticked every box I hoped it would. Great fun!… 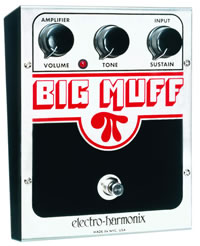 Traditionally, I’ve never been a fan of the fuzzier end of the distortion spectrum, however after feeding myself a stable diet of Hendrix and Gilmour towards the end of 2010, I found myself hankering for those long sustained notes. Thanks to the joys of eBay, I managed to purchase a used Big Muff Pi for a stupidly low price (under £25, bargain!).

There aren’t too many features to the Big Muff Pi to mention; Volume, Tone and Sustain knobs clearly visible on a somewhat large, metal enclosure. The size of the pedal may cause you a headache when re-arranging your pedalboard or you may want to purchase the smaller “Little Big Muff Pi” – apparently the “same” internal guts, housed in a much smaller enclosure.

There’s a battery compartment on the underside of the pedal and an additional 9V socket on the top side of the unit – however, a traditional “BOSS” style 9V connector will not work. You have to use a “male” connector as opposed to the “female” BOSS style. EHX sell their own power supply, or if you’re using a power source such as the Visual Sound One-Spot or Voodoo Labs Pedal Power, these come with the appropriate connectors.

According to the Electro-Harmonix website, the Big Muff Pi also features true bypass.

Stupidly easy! Plug in and play. Within seconds, you can dial in a range of fuzz/distortion tones. Not much else to say really, it’s that easy to use…

I tested this pedal on my Marshall Vintage/Modern combo, with the amp set to a clean setting. The sound is huge; if you’re new to fuzz pedals you maybe taken aback by the amount of gain that is instantly available on tap.

The volume range is quite impressive, but in use with my valve amp, if the volume control on the pedal is anywhere past 2 O’clock there isn’t a volume increase at all; just more overdrive.

The most impressive aspect of this pedal in my opinion is the flexibility of the tone control. You really do have a significant amount of control of how dark or bright you want to the pedal to sound. For those Gilmour-esque smooth lead runs, I found the tone control set at 12 O’clock worked best for my amp and guitar (’79 Stratocaster) setup and it really complemented the “original” amp tone.

The sustain control allows you to potentially dial in HUGE amounts of gain. It’s crazy how much gain this pedal emits and to be honest, it took me a while to get used to it. Within a short amount of time however, after blending the tone/sustain levels to taste, the pedal was perfect for what I wanted to achieve; smooth, sustained lead guitar tones.

You can dial in the controls for more chord based work, which is fun as you can easily achieve those 70’s metal style influences.

The quality is good, albeit a bit brutal if you’re not used to this kind of sound and it does get a bit noisy with the volume and/or sustain cranked past 3 O’clock.

This pedal was purchased used off eBay and appears to have had a lot of use by a previous owner (which is always a sign of a good pedal). Also, the pedal is housed in a large metal enclosure that would take a serious beating before it breaks. I have no experience of EHX customer service and the only previous EHX pedal I’ve owned is the Holy Grail Reverb, which like the Big Muff Pi, is built like a tank.

I was on the quest for a fuzz type pedal to experiment with and I certainly didn’t want to spend “boutique” prices on a unit that I may not enjoy; so purchasing the Big Muff for under £25 was perfect.

If you’re like me and you’re maybe not used to this amount of gain available from your rig, using the Big Muff Pi maybe a bit of a shock at first, but very quickly you’ll be dialling in some thick, raunchy sounds.

A good solid pedal, at a low price, that has ticked every box I hoped it would. Great fun!