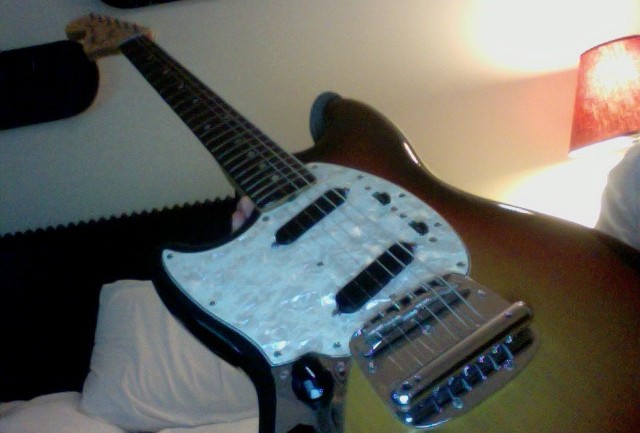 This review was submitted by Guitar Jar contributor: Hayden Kesterson

I haven’t used my 1974 Mustang for very long at all, I found it less than a month ago (while on vacation in Seattle, Washington) in fact.

…this guitar is awesome – enough said…

With that said I am infatuated with it. When I saw it on the wall in the guitar shop I went into it jumped out at me, and I haven’t been able to put it down since.

It is, simply, the best guitar I’ve ever played, and probably ever will.

My favourite features of the Mustang are the two tone switches and the vibrato bar.

The two tone switches make a plethora of sounds possible; anything from a super thin treble sound to a full rich more bass heavy sound is possible if one knows what to do with the switches. This is very helpful since I play a variety of styles.

The Vibrato bar is just fun. I use it to make atmospheric noises (along with my reverb and distortion pedals) in the background of the songs I play with my band, as well as make my solos more interesting. It adds new things to my playing that I never really thought of before.

This guitar is remarkably easy to use. The neck isn’t very wide, which is perfect for my small hands.

I can fly down the neck with ease as opposed to my previous guitar (an SG Standard) which took a little bit more effort for me to do so.

Finding the tone I want is also a breeze; just a flick of one of the tone switches I mentioned above and a spin of the one tone knob on the guitar I can get any sound I could want.

It’s the easiest guitar to use I’ve found.

It has that great old Fender sound. It’s a little thinner than my old SG but it still has plenty of depth for rhythm guitar.

It sounds like a Strat, but it has a little more of an edge, which I love.

It is kind of quiet, but not so quiet that I have to max my amp.

I have mentioned the different tones possible above (see ease of use and features) but, to reiterate, it has a wide variety of sounds, from super thin to nice and thick.

Especially for its age this guitar is very reliable. My friends, upon seeing it, thought that it was made in the 2000’s when really it was made in ’74.

The electronics are also perfect, although it does have a slight buzz, but that is completely drowned out when notes are played.

In short, if this guitar were a person I would trust it with my life.

This guitar is awesome – enough said.

This review was submitted by Guitar Jar contributor: Hayden Kesterson