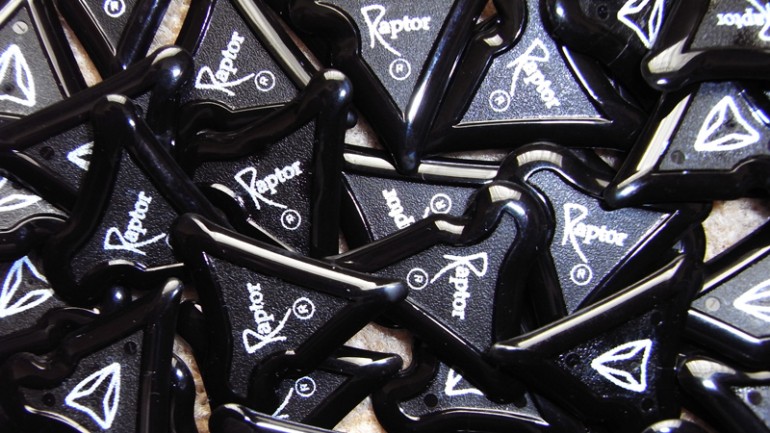 When I received the samples of Raptor guitar picks to review for Guitar Jar, I was instantly impressed and somewhat surprised at the unorthodox aesthetic design features.

…Raptor are producing a guitar pick for the “thinking” guitarist… 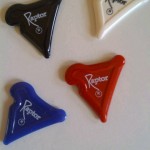 Raptor claim their picks are “3 picks in 1”. Glancing at the picks for the first time, that strapline wasn’t necessarily the first thing that came to mind! In truth, I was taken aback somewhat by the unusual design, but after a few minutes my initial shock made way for a firm appreciation that Raptor are trying to do something significantly different in a somewhat saturated market.

The three corners of the plectrum differ slightly, ranging from a very thin, almost pointed option, through to a slightly rounded and sculptured corner, through to a fat “ear lobe” style.

At first I didn’t know which corner of the pick to use, but it soon became apparent that each corner provides the guitarist a different option with regards to string attack and tone. The flexibility in design allows for very thin sounds to much warmer tones.

Once I got my head around this principle, I was off and away for a good couple of hours, experimenting with the different tones available to hand.

The sound quality produced by these guitar picks is good.

I asked a friend of mine to give them a go for a while and he responded with positive feedback. He is very much of a “shredder” and opted primarily to use the pointed corner of the plectrum, allowing him to use the tiniest amount of the corner, unleashing very fast speed picking.

The fatter “ear lobe” corner allows for warmer tones and depending on your amp settings, jazzy, fluid tones are easily achieved. I was pleasantly surprised by this, as I thought initially the acrylic material and aesthetic design would lean more towards a brighter sounding plectrum, but I was completely wrong.

Finally, the last corner of the plectrum is somewhat of a half-way house between the two other options; allowing for mellow tones or harsher tones if you dig in harder on the strings.

Aesthetically, I think at first you’ll either love them or hate them. Once you get past the unorthodox design characteristics, you’ll see that Raptor are producing a guitar pick for the “thinking” guitarist.

If you’re the kind of player who likes to experiment with subtle changes in tone and playing styles, it’s worth giving these plectrums a go, as you may be presently surprised.