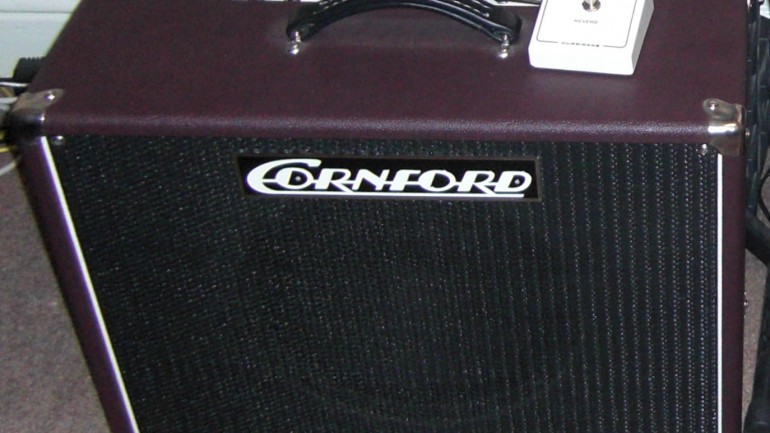 This review was submitted by Guitar Jar contributor: Paul

I bought this amp because I was planning on gigging small to medium venues and needed something portable, less than 50 watts, but with a nice sound for covers of pop and rock songs from the 60s to the 90s.

The Hurricane is a 1×12 combo, rated at 20 watts with built in spring reverb, so it fits the bill nicely.

…This amp is quite simply breath-taking in its sound… 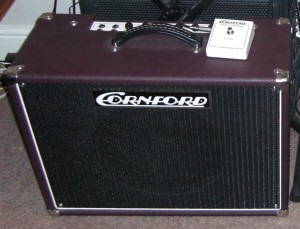 I carried out a lot of research on YouTube, internet forums and manufacturers’ websites to find the perfect mix of portability, flexibility and sound, and settled on the Hurricane, albeit with a degree of trepidation about the amount of clean headroom.

I had auditioned a Cornford Harlequin some time ago, and didn’t like the harshness, and I had listened to audio reviews of the Hellcat and again was not impressed, and I was a bit unsure if I’d like the sound in the original, but I was blown away when I eventually auditioned the amp.

I came across it in a local Gumtree ad, and the seller was only selling because he was upgrading to the Cornford MK50II, and needed to make up the price differential by selling it.  He has since asked me to sell it back to him if I ever decide to part with it.

The first thing to notice about the Hurricane is the Cornford livery.  The whole thing is covered in oxblood coloured Tolex, which is so neatly applied, you can hardly see the join.

The single 12 inch speaker is front-mounted, and protected by a smart black nylon grille cloth, which in turn is surrounded with neat white piping.

The whole front panel is fastened tidily to the front with four chrome screws and cup-washers. The Cornford name plate sits proudly to the top of the grille.

The quality of workmanship is superb, and this continues with nicely aligned chromed steel corner protectors.  The thing is topped off with a sturdy leather handle.

The attention to detail is superb and it is clear that the makers of this combo know their stuff and care about their craft.

The cream-coloured control panel is on the top of the amp, protected from accidental knocks by being tucked neatly away in a recess at the rear, and is clearly labelled in black silk-screened text, so that it can be easily read from the front.

The jack sockets for the effects loop are, unusually, located next to the instrument inputs.  This is initially confusing until you realise that this is perfect for quickly setting up your effects when there is not a lot of time between set-up and gig.

It also means that you can adjust your set-up on the fly if things go amiss with your pedalboard.

My initial surprise at this feature turned into admiration at the clever folk at Cornford who have obviously thought carefully about who will be using this amp.  No fumbling about in the dark behind the amp mid-gig here.

The panel controls, from left to right, consist of a gain control, which adds power to the tone stack and the power amp simultaneously as it turns up, a reverb dial, which controls one of the most usable reverbs this reviewer has ever had the pleasure to experience (see more later on this), a set of three tone controls (Bass, middle and treble) which, unusually, are usable throughout their range of travel, and a master volume.

The whole thing is controlled by a sturdy pole switch, and a green LED in a silver collar indicates the power status.

The rear of the amp has outputs for one 8ohm or two 4ohm speakers, gold plated connectors to the reverb tank, and a jack socket for the included reverb switch.

This latter is reassuringly solid, being made from powder-coated steel plate, welded at the corners, and sporting the same livery as the control panel. Nice.

The speaker is a 12 inch Celestion Vintage 30.  This reviewer is not a fan of taking things to pieces, so Cornford’s claim that the amp is a hand-wired affair with no PCB’s is taken as fact.  This means that it is likely to be repairable and working for many years.

In summary, this amp says quality all over it.  Hopefully it performs as well as its promise. We shall see.

The amp is incredibly easy to use.  Plug in the guitar, turn on and play.  The tone controls are usable throughout their range, and it is nice to see that when you turn the treble up, it does not take away any bass.

The gain control initially increases volume, but as it turns more past 12 o’ clock on the dial begins to cause valve-breakup, and eventually pushes into saturated distortion.

The footswitch turns the reverb on and off, and if disconnected, the dial is used instead.

However, to engage in discussion about the controls on the amp, and what they can do, and where to set each dial to get “The” sound would be to miss the point of this amp.

It is true that the manual suggests particular settings, but, tellingly, it does not explain what tones you will get by doing so.

The Hurricane responds to what you play, and how you play it.  You can play with the gain setting to get rich, creamy distortion, and you can also dial it back to get sweet jazz sounds, the reverb can go from a gentle slap right through to a deep cavernous echo, and the tone controls can be set to give a soft, intimate warmth or can be adjusted to a raunchy rock tone.

These settings are all available, and are incredibly easy to find.  I found myself playing with the controls for hours, not to find a great tone because, quite honestly, I could not find a tone that wasn’t great, but because the sheer flexibility of the Hurricane encouraged me to experiment.

So for tweaking, and for studio use, the amp has a huge amount of flexibility, belied by its simple controls. But what about in the context of a gig?

It is fine and dandy playing in the house, but you don’t have the luxury of endless tweaking in the heat of the moment, so a different strategy is needed.

Again, the Hurricane was an eye-opener.  At sound check, the reviewer was asked to make sure the bass and keyboards had their space.

A quick tweak of the EQ settings and each instrument had room to breathe, without having to turn up.  This was a nice surprise.  The EQ controls are properly usable to shift the sonic entry and exit points of the sound, which is one sign of true pro-quality gear.

The next surprise came when playing.  Once the EQ stage had been set, one can set the amp up to sit on the edge of break-up, and because the amp is organic, the rest of it can be covered by varying volume and pick attack, and tweak further with the guitar’s tone pot.

This is amplification as it was meant to be.

I could not find a sound I did not like.  This was a revelation to me, as before this amp, almost every amp I have played through had some sound that I found unusable, or jarring in some way.

This amp is quite simply breath-taking in its sound.

Turn down the treble, and boost the reverb, and the sound becomes soft and mellow, perfect for dreamy jazz.

Turn up the gain, to the point of breakup and you are rewarded with a sweet blues tone that will bring tears to your eyes.

Then, turn the gain up higher, and the amp will reward you with singing sustain and a raunchy rock tone that screams hair metal, or at more sensible levels will give you some sweet 70’s grit.

This is not one for those looking for high gain or drop-tuned riffage.  The Hurricane is a musical amplifier, and responds to pick attack, so thrashers should look elsewhere.

It is a boutique product, point-to-point wired, with high quality components.

I have no concerns as to its reliability.  IF it breaks, the construction means that any competent tech should be able to fix it quite easily.

I was astounded at the quality of the Hurricane.  I was expecting something better than the Harlequin, which I didn’t like the sound of, but I was not expecting anything of this quality or sounding this good.

It is a one-channel amp, so variation of sound must either come from pedals or your guitar if you want to alter things mid-gig. Whilst it is fine to alter settings on stage, it can be problematic if favoured settings are forgotten.

It is sensible to set your guitar at mid-point and then set the amp to give you the tone you want, and use the guitar to control the gain.

The Hurricane also reacts well to pedals, and when set at the point of valve break-up and then pushed with an overdrive pedal will give you some powerful British rock tones, or with a chorus or delay will give you expansive dreamlike voices.

Overall, there is little to find fault with in the Cornford Hurricane.

It is a boutique amp, made to exacting standards, and which sounds absolutely superb.  If you are looking for a versatile amplifier which can take you from pop to hard rock sounds, this is on your must-try list.

Expect to take it home with you, though, because once you hear it, you’ll want to keep it.

This review was submitted by Guitar Jar contributor: Paul