The 2010 Bristol Guitar Show was staged at the Ashton Gate Stadium (home of Bristol City FC) on September 19th featuring a range of the UK’s leading guitar and effects manufacturers. 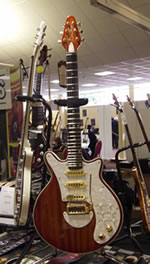 The Bristol Guitar Show was set in the exhibiting/function rooms within the Ashton Gate stadium. There was plenty of free parking with an entry fee of approximately £8 per person. On entering the main exhibition room, I was greeted by the wall of sound of guitars of all styles being played (to a very high standard) by both the attending public and the exhibitors, which was so refreshing as I had no idea whether the sound control limitations would also apply to this event. Fortunately not!

A deliberate decision by the event organisers was to treat all exhibitors equally – where the smaller independent companies have an equal opportunity to display their products and services alongside the more “household” guitar & accessory manufacturers. This had a positive impact on the show as there seemed to be an atmosphere where all the exhibitors were chatting among each other, sharing experiences, jokes and generally having a really good time. From the perspective of the general public, there was a good range of products to view and try with the majority of exhibitors coming across very friendly & accommodating.

In the main room, the items that caught my eye included:

The Acoustic Room acted almost as a sanctuary, cancelling out the commotion of electric guitar noodling that took place in the adjacent hall. The range of custom acoustic guitars on show was stunning – in most parts, we’re talking serious money, but the instruments are hand crafted to the specifications of each guitarist, making the instruments truly unique.

The Live Room was great fun, where Ernie Ball Guitars (courtesy of Stings & Things UK) were represented by a Sheffield accented “devil” who proceeded to challenge any member of the general public to a 6-string duel (think the Crossroads movie starring the dude who played the Karate Kid). In most cases, the “devil” rocked it hard and won the duels hands down, but it has to be said the talent on show from the general public was amazing. There was NO WAY I was going to set foot on that stage, as my 3-chord trick would, quite literally, be shot down in flames. 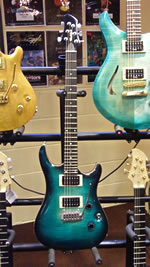 The Bristol Guitar show was an excellent day out, showcasing a good mix products from both acoustic, electric and effects manufacturers. It’s an inspired move by the event organisers to treat all exhibitors equal, giving all the companies the chance to display their products and services on an equal sized footprint.

The atmosphere was excellent, where all the companies represented were friendly, very approachable and it was so nice to have the opportunity to play on some incredible guitars.

I was blown sidewise by the high standard and range of products that are available from UK luthiers and manufacturers. On my drive home back to sunny Dorset, I found myself thinking (whilst stuck behind numerous tractors and caravans) about the guitars that are produced in this country and although the big boys such as Fender and Gibson seem to dominate the guitar market, the next time I’m after a new axe to add to the arsenal, I’m going to contemplate purchasing an instrument made by some of the independent companies that were being represented at the Bristol Guitar Show.

If you are after a new guitar, I encourage to look at the offerings from the UK independent manufactures, where it seems in most cases, the standard of quality is extremely high, blowing a lot of the “off the shelf” Fender & Gibson models out of the water.

Did I purchase anything from the show? Well, it would have been rude not to have taken something home with me. I left with an authentic Bottle Neck slide provided by Chickenbone John but is was the “Studio T” electric produced by Beryl Guitars that almost made me reach for my credit card. At an incredibly low £600 ball park price tag, I couldn’t believe how great the guitar played and sounded (especially compared to a lot of equivalent Fenders I’ve played). If this is the standard of instruments Beryl are about to officially launch, the future looks bright for this company.

The UK is home to some excellent independent guitar manufacturers and it’s thanks to events like the Bristol Guitar Show that helps the guitar playing community to be made further aware of our home grown talent.

A really enjoyable event and I hope it’s more of the same next year.