I guess we’re all influenced to some degree by our “guitar heroes”. You know the drill: many Hendrix/SRV/Gallagher enthusiasts aquire a Fender Stratocaster. Angus fans will promptly purchase a Gibson SG and (optional) school uniform. Keef followers may purchase a Telecaster, tune to an open G and ditch the low E string. You may even do all three! Many iconic guitarists can be associated with a particular model of guitar, but what about the “other” guitars they use?

I remember a couple of years back when Kirk Hammett was seen wielding a green Strat in one of Metallica’s videos and I couldn’t believe he ditched (albeit temporarily) his signature ESP’s. It just looked weird! I had the same uneasy feeling this morning when I laid eyes on a recent photo of Dave Murray from Iron Maiden playing on a Les Paul during the current “Final Frontier” tour. 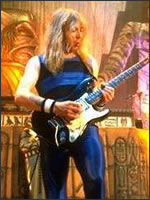 Dave has traditionally been linked with playing Fender Strats for many years. His ex-Paul Kossoff ’57 Stratocaster is somewhat legendary to Maiden fans worldwide. That was the guitar he used for many classic albums and tours, in particular the Live After Death World Slavery Tour. As a 13 year old kid, I purchased the Live After Death video (a good 7 years before I even strummed a guitar) and I remember thinking how cool his guitar looked and sounded. Viewing the set lists for the current Maiden tour I’ve no idea about the number of songs on which Dave plays the Les Paul. My guess it’s just for one or two songs, as I can’t see him putting his Strats down for long.

I think it’s great that guitarists use equipment that suits a particular song, but somehow it just doesn’t “seem quite right” when you first lay eyes on photo of one of your favourite guitarists playing a guitar that they’re not usually associated with.

I’d be curious to hear about other examples of guitarists who have been seen to “switch allegiances” to other brands, whether it’s a temporary affair or long-term commitment. If you have any suggestions, please write them in the comments below.