I’m always excited by a new Iron Maiden album release. For the past 10 years, I’ve seen Maiden play live whilst they’re touring promoting new material. At the Sonisphere UK festival earlier in August 2010, lead singer Bruce Dickinson eluded to the fact that the new album, The Final Frontier, may have a few surprises up its sleeve. Well, he wasn’t wrong…

These tracks are a perfect example of why Iron Maiden have been at the forefront of Heavy Metal for the past 30 odd years, fusing excellent song writing with absolute top quality musicianship… 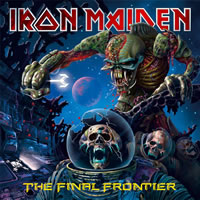 It’s no secret that I’m an Iron Maiden fan. One of my earliest memories of Maiden began as a young kid, watching the old Lucozade TV adverts with Daley Thompson sprinting to the soundtrack of the classic “Phantom of the Opera” (from Maidens debut album) before guzzling 2 litres of Lucozade. The joy of actually purchasing the original Iron Maiden album on cassette and actually hearing Phantom of the Opera for the first time in its entirety still lives with me today.

Since Bruce Dickinson and Adrian Smith returned to the Iron Maiden fold for the Brave New World album, I think the band has produced some of their best material. Their last album, “A Matter of Life & Death” is an album that took a while to grow on me and now is one of my favourite Maiden albums, so I was curious to know if The Final Frontier would be the same.

This week, I had a couple of long commutes for work, so after
downloading the album from Amazon (for the bargain promotional price of £3.99, no longer available), I cranked my car stereo very loudly…  when the album starts you are greeted with some deep bass sounds followed by some thumping drums and some chugging guitars. This builds nicely for a few minutes until the main track The Final Frontier comes crashing in – and it’s brilliant! The chorus for this song has been going around my head all week; I’m even singing it loudly to my kids, not that they have a clue what I’m on about. This first song is actually quite refreshing and I could recognise Bruce was correct when he mentioned to expect some new ideas.

The album continues into the song “El Dorado”, the free download track Iron Maiden have been using to promote this album. When they performed it live at Sonisphere it sounded excellent and now I love it even more. “Mother of Mercy”, penned by Adrian Smith, is another track that builds and builds and again, the chorus on this song is brilliant, to the point where I find myself trying to sing in an “air raid siren” style.

Unlike a lot of albums, I actually find The Final Frontier gets better as it progresses. Songs such as “Isle of Avalon” and “Starblind”, in my opinion, are simply epic. These tracks are a perfect example of why Iron Maiden have been at the forefront of Heavy Metal for the past 30 odd years, fusing excellent song writing with absolute top quality musicianship.

The 11 minute “When the Wild Wind Blows” is a perfect way to finish the album, featuring huge dynamics from all members of the band and I should imagine this song will be awesome to hear live.

There are very few albums I listen to that I have to play again instantly as soon as it finishes. I almost crashed my car when I found myself fumbling away at my MP3 player to start the album again half way round the M25.

This is a great Iron Maiden album and it’s exciting to think that Maiden veterans like myself will enjoy this, as well as the new breed of younger Maiden fans, which in many cases, this could be their first taste of the band. If this is their first experience of Iron Maiden and then they discover Powerslave, Live After Death, Number of the Beast etc, they’re in for a very, very enjoyable musical discovery.

There are many highlights from this album – it’s true that Maiden have tried a few new approaches in The Final Frontier, all of which are highly positive, so much so, it feels like they’re almost re-defining the hard rock/ metal scene, again.

Often with Maiden albums I try to pick a “Man of the Match” where either Nicko, Bruce or Steve Harris often win the prize.  This time however, the award goes to all three guitarists; Dave Murray, Adrian Smith and Janick Gers have written some of the most refreshing and interesting rhthym and lead guitar parts I’ve heard in a very long time.

If you’re new to Maiden or want to re-light your Iron Maiden flame, this is a worthy album to listen to. It’s arguably the best album they’ve released since Seventh Son and shows that Iron Maiden are still on top of their game.