Rick Jones is an acoustic singer/songwriter based on the island of Jersey, who blends a mix of influences and emotions into his live and studio performances.

…I really enjoyed listening to “Eden” as it blends a mix of styles, yet retains a firm identity… 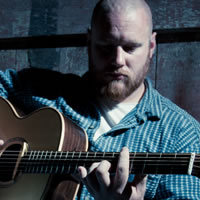 Rick isn’t a stranger to Guitar Jar; we interviewed him towards the end of 2010, where we discovered his love for Avalon guitars, heavy gauge strings and that he’s a closet “shredder” at heart.

Eden is a self-penned, 7 track acoustic album that starts as it means to go on. Opening with the title track, listeners are greeted with a beautiful finger picked introduction that caused me to grab my acoustic guitar to try and figure out what Rick’s playing. His singing has an almost haunting feel to this track, filled with feeling and passion. Interestingly, the acoustic playing and chord progressions remind me of an old 90’s track titled “’74-‘75” by The Connells. “Eden” is a great opener for the album, featuring good production, excellent guitar playing and passionate vocals. This is the type of track that I could listen to over and over again, no problem.

“Rut” is similar to the opening track in many ways; the guitar playing and vocals lock tightly together, with a groovy rhythmic feel. The pre-chorus has a somewhat “southern” edge and I enjoyed the guitar bends during the chorus. Rick’s vocals really come to life in this song and “Rut” has proven to be one of my favourite songs on the album.

“Tomorrow” is downbeat compared to the above tracks. During the entire 3:08secs I couldn’t help but imagine what this must be like when Rick plays it live; my mind was full of images of people on the edge of their seat, listening intently to the graceful guitar playing.

“Sunsets in the west” continues with the laid back theme. I particularly like this song due to the stripped back, straight chord playing; it almost sounds like Rick is baring his soul to anyone who wishes to listen. The guitar solo clearly demonstrates Rick’s talent as a guitarist, featuring tasteful bends and chord licks. In his Guitar Jar interview, Rick explained how he often receives kind words about this song; “the subject of the song is about leaving people behind and knowing that they see the same larger picture of the world as you do, despite any miles between you”.

Knowing about the subject of “Monster”, I felt compelled to listen intently. A song about the horrific activities of serial killers Fred & Rose West, the guitar playing almost has an upbeat tongue-in-cheek approach, whilst the words embrace the dark subject matter.

“Minarest” is brilliant and a definite highlight, embracing Middle Eastern flavoured chord progressions. The guitar playing is of an extremely high standard and would be just the track I’d love to hear Rick play as an “extended jam” live. “Minarest” is a perfect example of Rick’s excellent rhythm playing fused with his sublime lead guitar techniques.

The final song, “Exit Ramp” is 30 seconds of funky, percussive acoustic playing and seems a fitting way to end the album.

Rick Jones is an extremely talented guitarist and songwriter. His sense of rhythm is stunning and his lead guitar playing fits wonderfully (no showboating present at all).

I really enjoyed listening to “Eden” as it blends a mix of styles, yet retains a firm identity. Rick’s vocals are strong throughout, and his guitar style and vocal qualities sit really well together.

Rick’s music, in my opinion, is accessible to lovers of a wide range of musical genres and listening to “Eden” really makes me want to see Rick play live. If he continues to write new music, the future looks really exciting for him and I wish him every success. Talent as good as Rick’s really deserves to be recognised.