…It is hardly surprising that Matt McPherson is proud of his product. You could play all three of these guitars for hours… 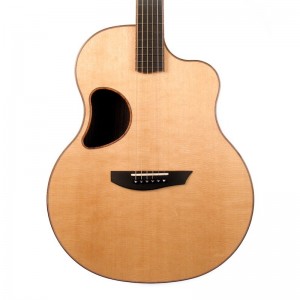 Where do I start? I first heard them a few years ago when the US Acoustic Guitar magazine gave away a copy of McPherson’s Expressions CD on their front cover.

Phil Keaggy was the only artist on the CD I had previously heard – brilliant guitarist and songwriter. Anyway, the quality of the playing, the recording and the guitar sound blew me away.

Having heard the CD, I investigated the guitars further and was fascinated by the design and the thinking behind the design. Many years of R&D have gone into the guitars that we see from McPherson today. The concept is bold, courageous, technically well-founded and the years of development have paid off in producing stunning instruments to look at and to hear.

Last year, in a guitar store in the US, I noticed four McPhersons on display, but about 3 metres off the ground on top of a cabinet. I asked the store owner if I could take a look and he brought each one down for me to play.

I had never played or heard anything like these (and I have played a lot of acoustic guitars). Each guitar was a different combination of woods and each had a distinctive sound. There was such complexity of tone from the strings played together, yet simplicity from the purity of sound.

Time was very short, but these guitars left an indelible impression.

A few months ago I was in Absolute Music in Bournemouth, UK, talking to Terry and Robin in the Guitar Department.

Terry had told me previously that Absolute Music was going to become the UK and European distributor for McPherson Guitars and that they were eagerly waiting for the first delivery.

That afternoon, Terry pointed over to four cases, neatly lined up on the floor and invited me to look inside each one. Four brand new McPhersons looked out from their Ameritage cases (with built in humidification devices), each saying, ‘play me’. How could I refuse? That US experience from a year back immediately returned, but this time on home soil.

McPherson guitars are a class apart and in talking to Absolute Music I have been able to spend more time with these fine instruments and share my thoughts with others here on Guitar Jar.

So what is there?

At the time of writing, Absolute Music has three McPhersons in stock (a fifth guitar arrived after the first delivery and two have already been sold). All three are from the six-string series, but each has different tonewoods and there are two different body depths. There is a:

I’d not come across sassafras before as a guitar wood. It is said to be somewhere tonally between mahogany and walnut, but its additional quality is that it is visually spectacular. 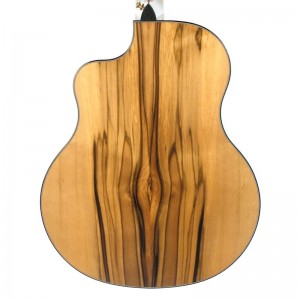 Every now and then you see a guitar that has outstanding looks and the 4.0 XP Black Sassafras/Bearclaw Spruce easily falls into that category. (See for yourself in the adjacent picture).

What other features make McPherson guitars stand out from the crowd. Apart from the soft cutaway the most obvious feature is the offset soundhole, deliberately positioned to ‘recapture tone-producing area from the centre of the soundboard’. The elliptical soundhole is beautifully bound with the same wood used for the body binding.

On closer external inspection you quickly find the cantilever neck, not glued or connected in any other way to the top of the guitar, but overhanging. Again, the reasoning behind this is to enable maximum resonance of the soundboard.

Looking inside you can see the overpass/underpass bracing, where the multi-layer braces pass over and under each other at intersections. Just inside the soundhole is the volume control for the LR Baggs pickup – the only other clue to being an electro acoustic is the endpin jack socket.

More information about the construction and features can be found on the well laid out McPherson website. Everything about these guitars ‘oozes’ class and quality. The workmanship is faultless and even if you have no interest in guitars you cannot mistake these instruments as objects of extreme beauty.

A few words must be said about Absolute Music. In the US store I visited the McPhersons were way out of reach.

I know that there always needs to be a compromise between accessibility and protection, but at Absolute Music the McPhersons are on the wall at head height and can be appreciated closeup. True, they are on lockable wall hangers, but that is a standard precaution in many stores.

The guitar team at Absolute Music have a great attitude to customers trying any stock. They are always on hand with information and advice, but not hovering and pestering for a quick sale.

The acoustic room at Absolute Music is huge. It is humidity and temperature controlled and provides a relaxed atmosphere. If you want more privacy, then there are several demo rooms that can be used and you are under no pressure from the staff to ‘get on with it’.

Let’s get on with the review.

These guitars come strung with Elixir Nanoweb mediums (13 to 56). Each guitar comes with three bone saddles that are interchangeable to give low, medium or high action.

At Absolute Music the 3.5 XP Rosewood/Redwood guitar has been restrung with lights (11s) and the low action bridge has been fitted.

The other two guitars are as delivered. The lower action/lighter strung guitar is easier to play, but the other two give no difficulties for comfortable playing.

I only played these guitars sitting, but they are well-balanced and everything just naturally feels in the right place. The neck profile and finish on the neck encourages playing. Moving from the head towards and beyond the twelfth fret is effortless.

When I went to Absolute Music to review the McPhersons I took along my current go-to guitar for playing live.

I’m pretty pleased with its sound and it has received many complements (many more than its owner has!).

Compared with any of the McPhersons my guitar sounded like a dead ‘plank’. What had previously sounded lively and sparkled was now sounding dull and lifeless.

I realise that my guitar is a small fraction of the McPherson price (more of that towards the end of this review), but it didn’t deserve to be shown so lacking and inadequate against these guitar masterpieces.

Something about the sound quality of each of the McPhersons:

I found myself trying to rank these guitars and come up with a preference. I realised very early that this was a mistake. Their similarities and differences do not put these guitars in competition with each. They are simply different.

For those of you who have not visited Absolute Music, it is blessed with 10 fully equipped rehearsal rooms, one of which I was able to use to try the McPhersons acoustically and then fed directly into a PA.

With the PA’s EQ set flat and no effects, all three guitars are again well balanced with all strings projecting evenly.

The LR Baggs pickup provides a very natural sound with no colouration from the electronics. 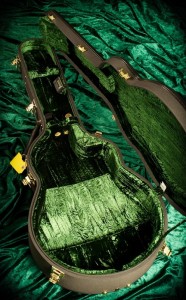 Reliability is always difficult to evaluate on new instruments, but these guitars give the impression that they are pretty tough.

When looking at them in their cases I felt they were saying, ‘I’m beautiful, but I’m here to be played’. Talking of cases, they are delivered in Ameritage cases which have a good reputation for toughness and durability.

When describing these guitars it’s easy to run away with hyperbole and excess use of superlatives.

They are stunning, both to look at and to play.

The sound enters new territory for high quality and listenability.

They are very satisfying instruments. It is hardly surprising that Matt McPherson is proud of his product. You could play all three of these guitars for hours, picking out subtle differences between them, but the reality is none would disappoint and any one of them would be a friend for life.

So far, no mention of price. You won’t be surprised to read that these are not low price guitars. The starting price is over £5000. Is this value for money?

To put the price into context, there are several other US and UK luthiers whose prices are similar if not higher.

For this price, you are getting a very high quality instrument, where the sound is in a different league to most other guitars, the quality of construction is impeccable and the guitar is likely to last a lifetime (if well treated).

Each guitar takes around six months to build. So what is the cost? These guitars are keepers and if you buy one and keep it for 30 to 40 years, then this can work out at less than £150 per year.

That seems like a pretty good deal to me for an instrument that is a world leader. Based on this logic, it makes sense to buy one sooner rather than later. I hope my wife sees it in the same way…