This review was submitted by Guitar Jar contributor: Nathan

I have just spent the past week with the new synth engine pedal from Electro-Harmonix dubbed the “Superego”. If ambient soundscapes is your game or even part of your game, you should read this review and then immediately go get this pedal.

…it is essential that you give this pedal a try… 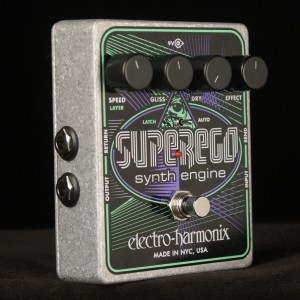 The main feature of the Superego is its ability to give infinite sustain to whatever you feed it. Of course Electro Harmonix has the “Freeze” pedal which has this kind of capability, but the Superego expands on the idea by giving you three different ways of using this sustain along with adding a few very interesting bells and whistles.

The Superego has three different modes of operation: Latch, Momentary, and Auto mode.

These modes are selected via a left to right toggle switch in the center of the pedal. Each of the modes are controlled by the four knobs across the top of the pedal: Speed/Layer, Gliss, Dry, and Effect.

Once you remove your foot the chord is “released” and the sustain stops.

It is worth mentioning that while a chord is being sustained, your original signal is essentially bypassed by the Superego allowing you to solo or play over the chord you are sustaining. In this mode the Speed/Layer knob acts as a speed control for the attack and decay time of the effect.

“Latch” mode is where the similarities between the Superego and the “Freeze” pedal stop. In “Latch” mode the Superego lets you layer a series notes simply by playing a note and taping (not holding) the footswitch.

The Superego will “catch” the note you play and sustain it infinitely. To begin layering, just keep playing notes and tapping the footswitch. Each time you do the Superego will sustain each new note along with all the ones you previously played.

To turn off the effect in Auto mode you must double tap the footswitch. In this mode the Speed/Layer knob controls the length of sustain. Turn it down = short sustain. Turn in up = infinite sustain. This is also where that Gliss knob really comes into play. If you are familiar with synthesizers at all then the Gliss knob is basically portamento for guitar.

Essentially the Superego will “glide” from one note or chord to the other as you play them. If you play a low note and then a high note it will “glide” up and the opposite is also true. Gliss is GREAT!

The final really cool feature of this pedal is that has its own effects loop. This means that you can run other effects in to the Superego itself that do not affect your normal signal path.

For example you could run a delay pedal into the superego effects loop and the delay would only be heard when the superego is on or active. The sky is the limit with this feature.

The Superego is definitely not your average stomp box. It only takes a little getting used to.

The pedal itself and its controls are not at all complicated. The only part that takes a little adjusting is how best to use it and utilize it.

It took me about 30sec to get a sound that astonished me. The one thing that I did notice about the pedal is that it “tracked” better earlier in my signal chain than at the end.

When I had it as my very last pedal I found I had to really strike the strings quite hard to get it to pick up and sustain the notes. Once I moved it this problem was eliminated.

My suggestion for ideal placement having the pedal as close to the start of your signal chain as you can but after and overdrive or compressor. This simply ensures that the pedal is receiving a good strong signal to play with.

The sound of the pedal is very true to whatever you give to it. I made sure to listen carefully when just sending it my clean signal and I did not notice any discernible colouration of my tone. The same is true that the Superego preserved the tone and characteristic of any pedal I added.

So far so good! This is a brand new pedal so time will truly tell, but in my experience Electro-Harmonix has had a great track record.

I fully expect to get a long life out of this unit.

Personally, I love this pedal and it will have a permanent bit of real estate on my pedal board. It certainly is not for everyone though.

I employ a lot of ambient playing with what I do and to that end there is hardly a pedal I would recommend more strongly than the Superego.

If you are a straight up rocker with little interest in such things you should probably skip this one.

But if you are at all interested in adding a game changing element to your arsenal, it is essential that you give this pedal a try.

This review was submitted by Guitar Jar contributor: Nathan