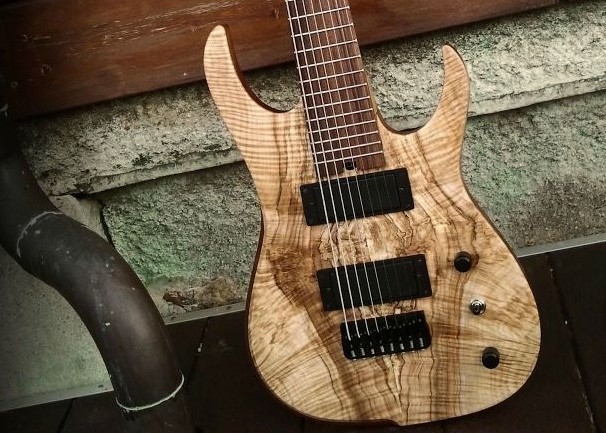 This review was submitted by Guitar Jar contributor: Theo Sandberg

The making of this guitar is something I can happily say I will never forget. Patrick is an expert luthier with the skills of a god when it comes to small detail!

…the difference between his guitars and a stock guitar retailing at roughly the same price is astonishing!… 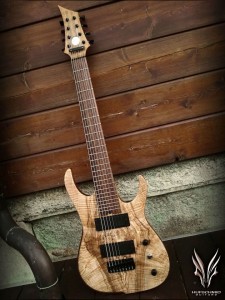 I hope you enjoy this review and can find as much joy out of his guitars as I have.

When we (Patrick Hufschmid and I) started planning the 8 string, the original idea was to use mahogany for the neck but one day I received an email from Patrick saying he had decided to use some of his private stock Aftenzia for the neck.

At the time I did not understand the importance of this although Patrick had told me that Aftenzia, as a wood was very firm. Now I can easily say, the neck is as firm as any other guitar you will come across! It might as well be made of concrete!

As the guitar is Oil Finished, you have to be careful and keep an eye on the humidity of the area in which you keep the guitar so that the wood does not swell, however, even in humidity that is likely slightly too high for the guitar, the neck has stayed completely solid!

When the guitar first arrived I was very worried that the scale length and thickness of the neck would be a problem for me (as beforehand I had only owned 6 and 7 strings).

However, within minutes of playing the guitar I was quickly re-assured. One interesting thing Patrick did was asked for a tracing of my hand so he could model the neck to fit my hand perfectly. This I imagine made a huge difference to the playability.

I have invested in many guitars (including Paul Reed Smith Custom 24s and various 7 strings) yet I can happily say this is by far the easiest to play on! It came set up with perfect intonation and action as low as possible without string buzz.

When I first asked Patrick as to what pickups he usually chose to put in his guitars he told me he got a man called Kent Armstrong (who he had supposedly been working alongside for years) to hand-wire all his pickups.

I will not lie; at first I was worried about this, as I had never heard of the man or his pickups. However, I can now officially say they are the most underrated pickups I know.

I have never had a pair of pickups as versatile as these. They can easily pull off beautiful clean and jazz tones at that same time as –excuse me for using this word – having one of the most brutal and chunky sounds when the gain is turned up. They have the perfect amount of mids making it possible to create “djent-like” tones as well as slick and smooth leads and bluesy riffs.

In fact, I am such a fan of the pickups I am thinking of possibly having a pair or two made for my other guitars!

Another thing that slightly worried me was the fact that the guitar was finished with a true-oil finish (meaning the guitar had no laquer to stop it from swelling).

After having the guitar for roughly 6 months, the guitar is in perfect condition. It does not dent easily either. Although I have had to give the guitar a rough oil twice (Patrick gave me clear instructions as to what products I should use and how often), otherwise I have had no need to do any maintenance of my own to it.

The build quality is outstanding! It is far beyond any other guitar I have owned (especially the fretwork). It is lovely to see an artisan who has such a passion for his work that they can create an outcome alike this guitar.

Patrick as a luthier, surprised me in many ways during the project. First of all, the amount of contact he had with me during the making of the guitar was fantastic! He gave me daily updates (frequently with pictures of the guitar in the making) and kept me in touch with the project as much as I could have expected anyone to.

Patrick also taught me many different things to do with guitar luthiery and was always interested to hear my opinion and answered all my questions with patience beyond recognition!

There is something truly special about Patrick and his guitars and I can happily say I would seriously think about investing in another of his guitars in the future. While they are not the cheapest of instruments, the difference between his guitars and a stock guitar retailing at roughly the same price is astonishing!

If you have the money and time, I would seriously suggest investing in one of his guitars as he was a pleasure to work with and produces works of art.

This review was submitted by Guitar Jar contributor: Theo Sandberg