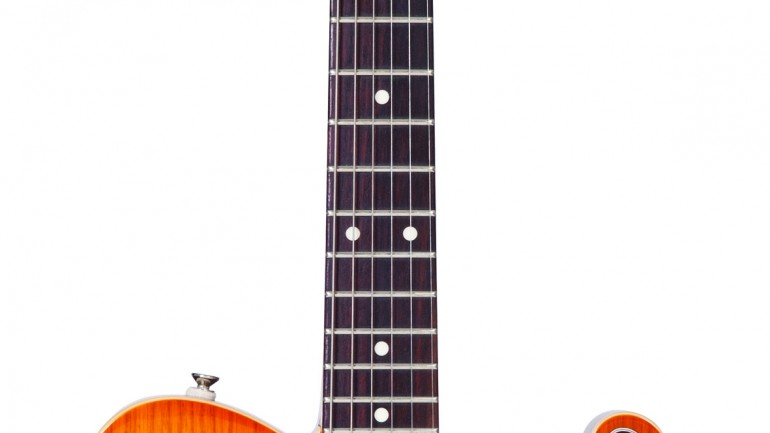 The Fret-King Black Label line gave European debuts to the Gregg Wright Corona GWR and John Verity Corona JV artist models, as well as a bunch of standard Esprits and Country Squires, and a Ventura.

An exciting new pair of Fret-King Stvdio Country Squires – a matching guitar and bass, handmade by Fret-King mastermind Trev Wilkinson in his Southport workshop – also turned heads and wowed crowds with their luxury play and feel, their striking looks and their jaw-dropping array of sounds. Trev was on hand to guide people through his new designs and give out sage advice on everything guitar-related.

The JHS stand also featured a strong lineup of Vintage electrics and acoustics, including the first European plays of the Gordon Giltrap Deluxe signature acoustic, and a trio of classically-themed Vintage Historic Series acoustics.

The new Vintage ReIssued Graham Oliver signature V60GO, the second signature model devoted to the Saxon-founding guitarist, made rock and metal players weak at the knees, while perennial favourites like the Vintage ICON Lemon Drop and the ReIssued V100AFD Paradise were constantly off the wall and getting cranked up.

A lot of the cranking came courtesy of Hughes & Kettner’s devastating TubeMeister amps, which were liberally dotted around the stand. JHS began exclusively distributing H&K in the UK and Eire at the beginning of April, with exciting new products set to be unveiled soon.

Meanwhile, an endless line of attendees formed to have their pictures taken with various instruments in the unique SpongeBob SquarePants Real Musical Instruments range, while classical players flocked to try out the award-winning Santos Martinez range, including the Raymond Burley signature model, which recently took home the coveted 2012 Music Industries Association award for Best Classical Guitar.

Dennis Drumm, JHS’s Managing Director, said: “Musikmesse Frankfurt is probably JHS’s most important export show of the year, and with a full appointment diary of customers from the many territories JHS brands are represented in, the show was a busy one, with new customers, and growth. German consumers and dealers clearly love the Vintage and Fret-King brands, and our German distributor, Music & Sales, owners of the famous Hughes & Kettner brand, reported strong dealer business on Vintage, proving the key position of the brand in the most vibrant market in Europe.”

All the new gear from Fret-King and Vintage is in stores in late spring 2013. For more information, visit the JHS website.