Worldwide trade distributor John Hornby Skewes & Co. Ltd. pushed on from a strong 2012 to make Winter NAMM 2013 its most daring and successful show to date as an exhibitor. 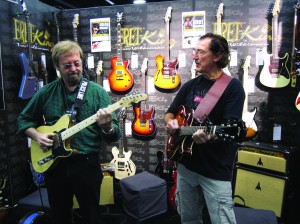 Leeds-based JHS saw its regular Hall E 1212 booth subject to a wealth of interest punters, players and press from across the world as it expanded its Trev Wilkinson-designed Fret-King® Black Label™ range with a series of distinctive new instruments.

Always a head turner and a huge draw, the beautifully distressed Vintage ICON V52MRBS was in town to showcase just why a host of studio players from Nashville’s legendary Grand Ole Opry show have chosen it to deliver their trademark country licks – and many pros showed up to put the guitar through it paces, including the likes of the legendary Richard Thompson, Mick Radford and Gwyn Ashton.

With its greatest ever range of new instruments on display, and an overwhelmingly positive response from those who attended the show, the future looks bright for the JHS guitar brands.

Dennis Drumm, JHS’s Managing Director, said: “NAMM, a showcase to the world and so important on many levels. This year we’ve widened our international distribution, with several new countries, we’ve been awash with great players coming to check out Vintage and Fret-King, and seen many of our loyal US dealers. With Vintage and Fret-King being distributed in the US market, players at all levels can enjoy two of the greatest guitar brands in the world!”

The new Fret-King and Vintage guitars are in stores in Spring 2013, so make sure you check them out when they hit UK stores.