Joe Matera to release his new album Creature of Habit

Instrumental melodic rock fans will be rejoicing this September as renowned guitarist Joe Matera unleashes his new album Creature Of Habit on the world. The Australian native has built up a fine body of work to date and this may well be his best yet. 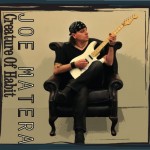 Following in the tradition of fellow instrumental artists such as Joe Satriani, Matera has added a vocal track to the album as well as the eleven instrumental numbers (9 plus 3 bonus) on offer here. Adding a new dimension to his work, which fans will savour.

‘Fallen Angel’ is one such highlight, acting as a perfect showcase for Joe’s vocal ability, alongside his instrumental/guitar work. Other tracks include ‘Slide’, ‘Endless Summer’, Brave New World’ and ‘Outland’.

Backing up Matera on Creature Of Habit are American drummer James Strickler ( Angelic Rage) handling drumming duties (as well as bass on several tracks), and Tony Dolan (Venom, MPire of Evil) on bass on three tracks and Rich Davenport on one.

Matera is also joined by a few guests, The Angels’ Rick Brewster, Smokie’s Mick McConnell – both who appeared on Matera’s 2011 EP Slave To The Fingers’ which received glowing reviews across the globe, make a welcome return, again making a guest guitar solo contribution on one track a piece. (Brewster on ‘No Way!’ and McConnell on Outland) as well as Fred Mascherino (Taking Back Sunday, The Color Fred, Terrible Things) who contributes a stunning guitar solo on Endless Summer.

A much admired artist and esteemed music journalist, Matera is a man of many talents, COH easily highlights just how much his music means to him and how dedicated he is to producing the best album he can.

COH is scheduled for release September, 2012 via W.A.R Productions.