This article was submitted by Guitar Jar contributor: Dave Walsh

Luthier’s or guitar ‘repairers’ can be your best friend at times, but unless their guitar physically breaks into two pieces, many players avoid what they see as costly maintenance like the plague – only realising the error of their ways at the sound check when it’s far too late. But is regular guitar maintenance a simple cash cow dreamt up by the ‘greasy mechanics’ of the guitar industry or an essential way of extending the life of your guitar?

…I’ve seen a £50 kid’s classical guitar that played like a beaut straight from the factory and a £2,500 Les Paul that was so badly built and set-up by the manufacturer that it was frankly an embarrassment to their name… 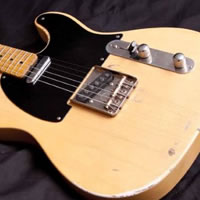 I’m sure many of you have been in this situation at some point: you’ve just taken your beloved budget guitar along to a local luthier in need of what my seem like a minor repair only to be informed that it needs a set-up/fret dress/other work, and it’s gonna cost anywhere between £30 and £100 or more to sort out. You were probably shocked, some of you may have snorted derisively at the notion, while some of you may have walked away in disbelief.

So, why is this chap in a dusty room, strewn liberally with guitars in various states of repair telling you that your sub £200 instrument requires maintenance, when to you (apart from whatever niggly fault brought you here in the first place) it plays perfectly well, thank you very much. The answer is this: the luthier knows more about how a guitar should/can feel and play than you – assuming he/she is experienced enough – they usually love guitars as much as you do too and are offering genuine and good advice.

Of course there are bad apples in every industry but rarely have I witnessed a reputable luthier suggest unnecessary work – more often they’ll make the recommendation that ‘ideally’ the guitar needs setting up to get the best from it and leave the decision to you. The criteria for how urgent this set-up or maintenance work is normally based on two or three applications: firstly, if you play at home for your own pleasure, then a set-up will make the guitar more pleasant and easier to play; secondly, if you are about to play live, then a set-up is certainly desirable to prevent string breakage, LOUD tuning woes and the like or thirdly, if a recording session is coming up where a thorough set-up is essential as bad intonation is excruciating on record…

The majority of pro players (and by that, I mean anyone who earns either a part or the whole of their income from playing guitar) have their guitars serviced regularly. Guitars are the tools they use to earn a crust and keeping them in excellent working condition is not only sensible but a requirement. But you don’t have to be a pro player to justify the cost of maintenance work. Most guitars need some form of set-up straight from the box they were shipped in and regular maintenance actually holds back the tide of wear and tear which prolongs not only the lifespan of frets and other hardware, but crucially how responsive the truss rod is – I’ve had to re-fret dozens of guitars with warped necks over the years which would have been just fine with a simple fret-dress if the owner had had the neck checked and adjusted even occasionally during the guitars life.

Back in the dark ages when I first worked in music retail, a brand new £80 acoustic starter guitar would often be a horrendous piece of kit. You’d wince as you removed it from the packaging and saw the loose or wonky frets, a rusty-stringed action that you could happily limbo underneath and often the neck would be badly glued in to the body and tuning stability was exceptionally ‘experimental jazz’ in nature. The last decade or so has seen huge improvements in manufacturing with far tighter tolerances thanks to CNC machinery and cheap far eastern labour has driven down costs to the point where – with the exception of a few minor tweaks – the majority of guitars now arrive to retailers in playable condition with reasonable hardware and decent enough woods. Good enough for a beginner and often good enough for the pro particularly if you’re happy to spend anywhere in the £200 region. Quite astounding value compared to the horrors of not so long ago. 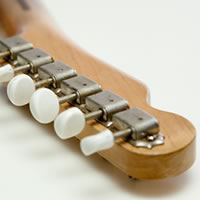 That said – you can’t simply assume that your new purchase will be perfect for you. We all play the guitar slightly differently; we have different sized fingers, physical build, hand strength and dexterity. The old adage of learning to play on a terribly set-up acoustic with cheese wire strings being good for you as it improves hand strength, calluses etc. is frankly nonsense. The majority of people who learned to play on such instruments back in the ‘50s or ‘60s that praise the virtues of such torture simply didn’t have a choice. Perhaps selective or rose-tinted memory plays a part, but certainly nowadays there is no reason to learn to play on a bad or uncomfortable guitar, but price isn’t nor has it ever been a sure fire guarantee of quality.

I’ve seen a £50 kid’s classical guitar that played like a beaut straight from the factory and a £2,500 Les Paul that was so badly built and set-up by the manufacturer that it was frankly an embarrassment to their name. Sadly, the Les Paul owner had saved long and hard to afford the guitar and as an amateur player, he simply believed that it was his fault that he couldn’t get a musical note from the guitar – after all, he’d paid a fair old sum for it. Ridiculous really, but I can see his point and how he easily reached such a conclusion.

So, when is it okay to expect a perfectly playable guitar straight from the box? The honest answer is never – some are good, some great and some need a little or a lot of help for you to get the best from them. If you’re buying any guitar but particularly one in the £500+ price range then budget a little extra for a pro set-up – it may be the best money you’ll ever spend. It may be trickier to justify the extra outlay on lower cost instruments but bear in mind that if you purchase an instrument in any budget range from a retailer with an in house workshop/luthier then they’ll probably offer to tweak it to suit free of charge – if there’s anything actually wrong or faulty then the manufacturer’s warranty will cover it. Buying online is a different game entirely – yes, a warranty still applies, but you will probably have to fork out for delivery costs and a set-up so your ‘bargain buy’ may end up very costly indeed so beware or at least budget for some ‘after sales’ work.

Setting up a guitar is an involved process where numerous elements are tweaked to bring the instrument into balance both tonally and in feel. The nut, bridge, frets and intonation are all adjusted to make playing the thing a pleasure rather than an arduous task. If you’re a beginner struggling to hold down that first ‘F’ barre chord than it’s highly likely that the action on your guitar is too high – this could be a combination of high nut slots, bridge and or misadjusted truss rod setting. However, it’s not a magic wand scenario and no luthier in the world can make up for a lack of practice on the players part. But what we can do is eliminate the outside factors and give you an instrument that feels great in your palm and is a pleasure to play for many years to come – hopefully, this will inspire you to practice and play more often. The rest is up to you.

Dave Walsh is the director of Eternal Guitars and has worked at Andy's Guitar Shop in Denmark Street, the Guitar Institute in London and has written for Guitar & Bass magazine.