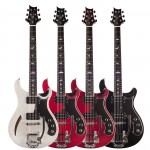 Just 15 guitars of each colour will be available in the UK.