Robot Roadies’ self-titled debut concept smartphone app takes you on a trip backstage to bring you all the unwholesome, hell-raising fun of life on the road with a rock band…

…play the part of ‘Randy’, tasked with collecting the many indulgent and often bizarre items commonly demanded by rock bands… 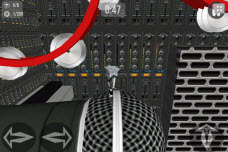 Ready to take centre stage on millions of smartphone devices around the world, independent App developers Robot Roadies announced on November 2nd 2011 the impending release of their self-­titled debut offering.

Rock legend meets classic arcade fun, Robot Roadies gives users the chance to join a hell-­raising rock band and play the part of ‘Randy’, a mechanical member of the road crew tasked with collecting the many indulgent and often bizarre items commonly demanded by rock bands.

Items range from daily necessities such as kegs of beer, groupies and fried chicken to more exotic requests such as  ‘an attractive looking vacuum cleaner’ and ‘a snowman made exclusively of yellow snow’.

Set to a classic, rock soundtrack, Robot Roadies is a journey through the deviant landscape of Sex, Drugs and Rock ‘n Roll.

To make it out on the other side with nothing more than a hangover, users will have to avoid evil subliminal messages, go crowd surfing and smash as many TV’s as possible to gain extra time.

“We set out with the very clear goal of creating the world’s craziest rock-­themed concept app. One year on and several hundred thousand dollars later, I think we got a bit carried away.” Said creator and maniacal App developer Roy Forsdick.

For a preview video of the app visit www.robotroadies.com.