Performing in a Tribute Band 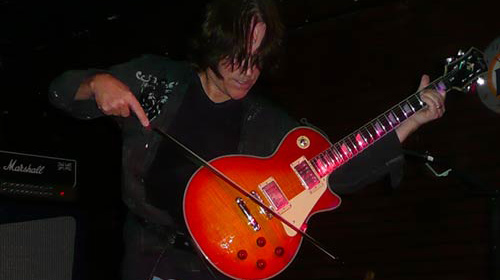 Being a guitarist in a tribute band is daunting. Not only do you need to nail the chops of some of rock ‘n roll’s greatest axe-slingers, you also need to have the tone.

US-based guitarist Chris Manning has the daunting task of filling the shoes of one of rock’s greatest guitar legends; Jimmy Page.

…Placing the overdrive pedal after the distortion pedal is critical…

In Chris’ own words… 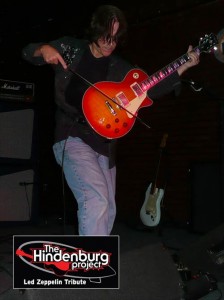 Playing the role of Jimmy Page in The Hindenburg Project, a Led Zeppelin tribute band is quite a challenge.

In addition to accurately learning Page’s parts, the Zeppelin catalog requires a diverse set of guitar tones in order to cover rock, blues, and acoustic songs.

We opted to create the studio versions of the Zeppelin catalog, so we added a 2nd guitarist who also plays some keyboards. I will be detailing the gear I use and hopefully provide some ideas on how you can achieve a variety of sounds.

You can also check out videos on our YouTube.com channel. 2012 is shaping up to be a great year for us, so keep checking our website for news and updates about shows and events.

The foundation of my sound is the Marshall AVT150H head. The Marshall is a 150 watt amp with an excellent clean channel courtesy of  a ECC83 (i.e., 12AX7)  preamp tube. The clean channel also has a gain control that allows you to go beyond ultra clean tones to achieve warm, blues tones with a hint of overdrive. The gain knob has a sweet spot just before achieving a slight overdrive, and that’s where I set it. It is important to have a great clean tone if you are running distortion and/or overdrives pedals in front of the amp.

The Furman SPB-8C Deluxe Stereo Pedal Board Case provides the pedal power, stereo routing as well as the isolation required when feeding two amps. With this amp isolation, there would be an audible hum in one of the amps. As a result, the Furman pedal board does much more than simply provide a case for my pedals.

To achieve the variety of sounds required to properly cover Led Zeppelin songs, I use both a distortion pedal with an overdrive pedal placed after it. The Boss CS-3 compressor and the DS-1 distortion are both heavily modified. The modified CS-3 greatly reduced the noise and creates a smoother sound than the stock Boss pedal.

The modified DS-1 mod is simply the best distortion pedal I have ever played through and it sounds significantly better than the stock Boss version with a smoother distortion and much lower noise. I am very capable with electronics and I know how to use a soldering iron so performing these pedal mods were relatively simple.

The Digitech Hardwire CM-2 Tube Overdrive is a Tube Screamer clone with separate low and high EQ knobs that offer additional tone shaping not found in the Tube Screamer. I set this pedal for a slight volume boost for solos and since it has a slight mid range boost, it helps me cut through the mix.

Placing the overdrive pedal after the distortion pedal is critical, especially since you want the higher gain device earlier in the signal path. The overdrive also can be used in conjunction with the DS-1 or by itself.

As a result, I am able to generate four tones: clean (i.e., no gain pedals), a clean with a bit of overdrive for blues songs such as “The Lemon Song” and “Bring it on Home”, a distortion sound for rock classics like “Rock and Roll” and “The Immigrant Song”, and a heavy rock sound with a mid-range boost great for solos.

Here is a list of the pedals on my pedal board and their order in the signal chain. I follow the recommended order of placing a wah first, tuner, compressor, distortion and overdrive, modulation and pitch, and then delay. 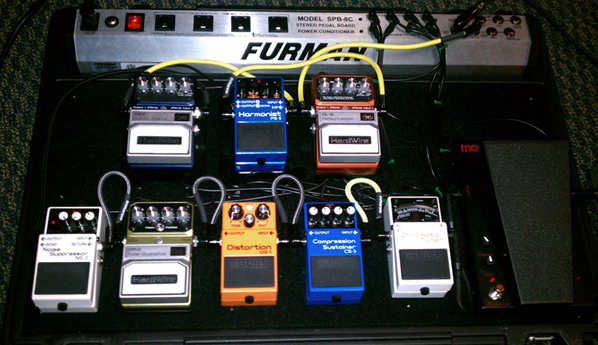 I am running into two cabinets, Peavey 2×12 over-sized cabs, with Eminence Swamp Thangs. These cabinets are much more portable than 4×12’s and also are designed with a removable back panel offering a half open-back option. I may be in the minority, but I don’t care for Celestions because of the pronounced high frequency response, producing what is sometimes called “ice pick highs”. The Swamp Thang speakers smooth out the highs, produce very warm tones, and a nice low end. Best of all, these speakers increase the volume over most stock speakers.

I have been playing strats for years in my instrumental rock project, the Chris Manning Band so there was an adjustment period to get used to playing Les Pauls. Being on a budget ruled out spending thousands on a Gibson so I went with an Agile AL-3100 Slim neck Les Paul as recommended by Roger Crisler, the most respected luthier in the Dallas area. For a little less than an Epiphone, the Agile has impeccable craftsmanship and much more band-for-the-buck than the Epiphones and allows me to get the classic Jimmy Page sound.

Playing in a Zeppelin tribute band requires me to play a variety of styles and techniques. Slide guitar is probably the most challenging as some tunes require I wear the slide the entire song like “Levee” and “Whole Lotta Love”.

Obviously a bow is used during “Dazed and Confused” and I integrate a wah pedal which provides additional sounds that work very well with a bow and allow me to accent certain notes. There are also altered tunings requiring me to have a guitar in standard tuning (EADGBE), one tuned for “Kashmir” (DADGAD), and one for “Levee” (FACFAC). As a result, I have no less than three guitars at every show!

I hope this article will challenge you to experiment with different pedals and configurations. Running a pedals before the amp with the amp’s clean tone as the foundation is not for everyone but I have found it offers great flexibility and always allows you to tweak and evolve your sound by trying different pedals.

Modded pedals are a great way to go too because many of them improve on classic designs and provide lower noise and superior tones than the originals.

Remember that great guitar tone is a journey, not a destination.