Seven the Hardway is a 5-piece rock/metal band formed in 2009 by guitar virtuoso Tony MacAlpine. This self titled debut album is due for release in the summer of 2010 in time for the European tour planned in September 2010. 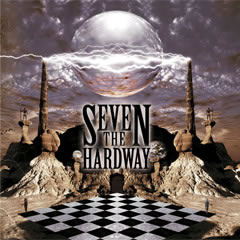 The album features some interesting artwork by artist Dale O’Dell who has illustrated a really interesting “other world” landscape image for the front cover.

I had no idea about the genre of this album before listening to it, but as soon as you play the first track it’s kind of obvious that this album is going to be a complete rock fest of downtuned and/or 7 string guitars.

The opening track “Liar” sounds very reminiscent of Alice in Chains. To me this is a recurring thought when listening to the whole album and at times I had to check that my media player wasn’t actually playing some bootleg AIC I had stashed on my system. When the harmonies kick in you’ll immediately think of the Staley/Cantrell partnership. The guitar work is also similar to Jerry Cantrell’s style at times except for the blistering shred runs that can often be heard. Some of Tony MacAlpine’s solos are huge – at times super fast, often with a touch of delay and drenched in atmosphere.

I particularly enjoyed the vocal melody for the song “Guilt”, especially the way it flows over the rhythm – and when the chorus kicks in your back into AIC territory.

The drums, bass and guitars are so tight it’ll be interesting to see how well the band pulls this off in a live performance – my guess is their live act will be fantastic.

Overall this was a good listen, with some great guitar playing and I particularly enjoyed the singing and melody lines. Fans of AIC will like the majority of this record. On my first listen, I found myself losing interest towards the end, however after my third I’m really enjoying this band.

A good listen and I reckon they are a band to check out live if you can.

For more details about Seven the Hardway visit: http://www.seventhehardway.net