This review was submitted by Guitar Jar contributor: Andy Nash

Yes, I know what you’re thinking. Yet another Strat review, yet another homage to the default choice for the wannabe Gilmours, Stevie-Rays, and Hendrix’s of this world. As a recent convert I can only whole-heartedly agree that the Strat does indeed live up to its reputation, from the legendary flowing curves of the body to its great flexibility and unique tone. It’s a hard template to improve on, but then, we know that already.

…the practical advantages of the Deluxe Series are well worth looking at as a worthwhile investment not only for high-quality studio recordings, but especially for the demanding live guitarist…

In this article however I’m looking at what makes this model just that little bit more special, showing why it’s well worth those extra pennies to add a Deluxe Series instrument to your armoury ahead of the Standard US model.

Ease of Use and Reliability: 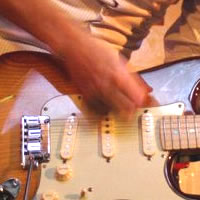 For once ‘Deluxe’ isn’t just a cosmetic term – you really do get a lot more for your money than for the Standard. You won’t be surprised to hear that the enhanced model does basically everything your stalwart Stratocaster does, but the added features of this series takes the instrument to a new level in terms of rock solid reliability.

One assumes that if you’re spending upwards of £1k then you’ll know your way around the layout of a Strat pretty well already. However, in my opinion the practical advantages of the Deluxe Series are well worth looking at as a worthwhile investment not only for high-quality studio recordings, but especially for the demanding live guitarist.

The fact that it sounds great is no surprise, but we all need to know that our instrument will perform as a trusty steed in the cauldron of the live arena. This piece of kit is a beast. The two-point bridge holds its tuning remarkably well despite rigorous Hendrix-style ‘dive-bomb’ treatment, and should you be unfortunate enough to break a string then the locking tuner system makes replacing one mid-gig within say, 90 seconds, a very realistic option.

The S-1 Switching is a handy little feature for yet more sonic flexibility in addition to the standard five-way switch, sequencing the pickups slightly differently in a way that emulates the sound of a humbucker. A little experimentation is what’s needed here – I found that this reacted very differently (specifically in terms of volume output) according to the amp and pedal system I was using. The more I use the guitar the more I find this useful, although I’d be lying if I said this blew me away at first and the jury is still out on this one.

My particular guitar has a maple neck, with a satin polyurethane finish. I think this deserves a mention as it consistently performs absolutely smoothly during those inevitable sweaty solos, whether you be hack-sawing it Cobain style or are more comparable to the gentle caressing of Clapton.

The key here is the N3 Cobalt Noiseless Pickups. I love them. There are bound to be Strat disciples who disagree, but I personally think this is a huge plus and eradicates that irritating age-old problem with the hum from single-coil pickups. Does it really adversely affect tone? No I don’t think so at all, this Strat squeals, sings, clunks, chugs and generally responds exactly as I would expect, cutting effortlessly through a mix (particularly when in unison with a Vox wah).

There is nothing quite like a soundman growling at you accusing you and your £4k worth of kit of having background hum “it’s those single-coils mate”. With your N3s you can rest assured that it’s likely you’ll be quiet as a mouse without a noise gate in sight. It’s worth mentioning here that my live setup is based around several standard Boss pedals (none with true bypass), and I don’t even get so much as an involuntary squeak from my rig these days. (More on dealing with annoying background hum in a later article).

So, in terms of the fabled Strat tone there’s nothing lacking here, at least so far as I can tell. I can confidently say that I’m never left wanting for more sustain or tonal options from a combination of the pickups, nor the added resonance of an ash body.

I don’t pretend to be a Strat expert and devotee with an in-depth knowledge of Fender’s back catalogue, but as an instrument for a gigging musician this ticks just about every box, being an improvement on the already brilliant original design. It solves those niggling problems in terms of single-coil hum, tuning issues with the tremolo, offers an even wider range of tones than before and so far has proved to be an extremely user-friendly, flexible and very reliable guitar.

On top of this it looks superb with the build quality you would expect, along with added nice touches such as the visible grain of the ash body and luxurious pearl inlays. Some guitarists swear by vintage instruments, but as brand new mine is immaculate and I couldn’t be more pleased with it. This particular guitar will more than likely be my trusted axe for many years to come.

For once, ‘Deluxe’ means what it says.

Andy Nash is a highly accomplished acoustic and electric guitarist and guitar teacher, with over a decade of UK and international live performance and recording experience.