Relic Guitar Debate… Love them or hate them?

A debate among guitarists over recent years is the subject of the “relic guitar”. To many, the appearance of a well used and battered guitar is a beautiful sight to behold. Somehow, a worn looking guitar appears to have its own unique character and personally; a story to tell.

…It’s not everyday you walk out of Vintage & Rare Guitars with a ’62 Strat in your hand, but it’s far more conceivable to leave the shop with a Custom Shop relic and a 2K dent in your wallet… 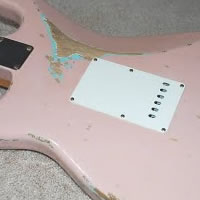 The appeal of owning an authentic relic guitar has grown so much over recent years that many luthiers offer to relic your guitar as a service and Fender is just one of many manufacturers that offers consumers the opportunity to purchase “brand new” relic guitars off-the-shelf. For example, the Fender Road Worn series allows guitarists to purchase a vintage looking Strat or Tele at not-so-vintage prices (although the Fender Custom Shop relic series takes prices to the opposite end of the spectrum).

The topic of the relic guitar can branch in many directions; from an individual personal opinion, right through to learning and applying DIY relic methods.

Some interesting points that Sean mentioned and I’m especially curious about the aspect of how well modern relic guitars play, compared to their vintage counterparts. It’s also encouraging to know that a high quality, modern relic guitar can be purchased at a fraction of a the price compared to an original. It’s not everyday you walk out of Vintage & Rare Guitars with a ’62 Strat in your hand, but it’s far more conceivable to leave the shop with a Custom Shop relic and a 2K dent in your wallet.

The subject of the relic guitar can open a can of worms. Many guitarists prefer to play a beautiful, pristine instrument, where others love the look and feel of a guitar that looks like its seen better days.

I’ve my own opinion; I love the look of a worn guitar. SRV or Frusciante’s Stratocasters look fantastic to me, however, something just doesn’t sit right about playing a guitar that hasn’t aged naturally. Having said that, if someone placed a Fender Custom Shop Gilmour relic in my hands, I don’t think I’d be complaining…

What are your thoughts about relic guitars? Please add your opinions by commenting below.