Recently I had the opportunity to record some electric guitar at Basement Studios, Wimborne. It was an interesting process as it gave me the opportunity to look at recording procedures (for all instruments) in more detail, especially with regards to the hardware and techniques used.

Mark Pitfield, the bass guitarist for the recording session, has over 35 years experience of playing the bass guitar in the local music scene in Dorset. Guitar Jar catches up with Mark to extract some of that valuable experience to share with other bass guitarists and in addition, there’s a brief video with producer Sean Hatton explaining the hardware and techniques used to capture Mark’s bass during the recording session. 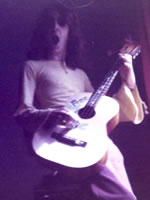 Mark with his modified acoustic guitar

Do you have any additional thoughts or successful tips for recording the bass guitar? If so, please leave your comments below.