The latest “15 questions” feature is with guitarist David Griffiths. Dave is the front man and rhythm/lead guitarist for the rock band BOSH, who during the past 7 years have performed live hundreds of times across the length and breadth of UK. In addition they’ve released numerous albums, most noticeably “Sound the Alarms” and “The Gloaming Hour”. Guitar Jar caught up with Dave to quiz him on his equipment, technique and any additional projects he’s currently involved with.

…I love guitar playing that conveys loads of melody and emotion… 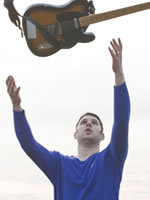 Dave and his beloved Telecaster

For more information about David Griffiths, BOSH and his charity involvements, please visit: