I had a Sound City 100W valve head in the late 70’s and early 80’s.  It was a beast of an amp but eventually it was replaced with a solid state Peavey combo.  That combo was gigged and gigged and was smaller, lighter, more versatile, and more resilient than the Sound City.  The valve head ended up in the garage – worthless – and got given away many years later. Such was the destiny of valve amps it seems.  (Now those heads are worth mucho $£.   Wish I’d kept it!).

…with the preamp gain wound back, I can get a pleasant Little Wing clean sound with my Strat – wind up the gain, and it sings quite well… 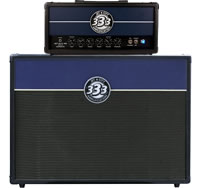 Anyway, over the years I’ve collected several amps – one of which was a mid 70’s tranny Marshall 2×12 combo.  Had a good sound and was flippin’ loud, but didn’t really offer me anything that my other amps didn’t.  Add to the fact that it’s getting on in years, I didn’t gig it, so decided to sell it.

So, to get to the point (hurry up Mark!) I put it on an auction site.  I had a little interest, but one particular potential buyer was very keen to swap for his amp – A Jet City Amplification 20w valve head and 2×12 cab.  It took me about 15 milliseconds to agree.

This duo is a no-frills pair with quite a bit of character.  The amp is a single-channel with the usual controls.  It sports a couple of EL84 valves in the output stage and the cabinet boasts a pair of Eminence 12″ drivers.

Both the amp and cab display a rather ugly (IMO) circular name plate with the numbers “333” on them which apparently denotes the 3 guys who own the company, one of which is Mike Soldano of Soldano amps fame.  Apparently Mike designed the amp.

Well it’s a single channel amp with one input.  The controls are named sensibly (none of this “roar” or “sparkle” type thing you see sometimes).  You plug in the cab, turn it on and away you go.

The only thing that gets me is that the far right control is Presence not Master Vol.  Master Vol is one control to the left of Presence.

The amp has a surprising array of sounds once you start turning knobs.

With the preamp gain wound back I can get a pleasant Little Wing clean sound with my Strat.  And wind up the gain and it sings quite well.  If I grab one of my humbucker equipped guitars there’s more grunt.  Sure, it’s not a Metal shredder tone but it’s a good rock/blues sound.

Not surprisingly, it’s pretty loud.  I can’t get it past 4 in the house without rattling the windows.

I can’t comment on reliability but I’ve seen some of the folks who work for Jet City answering questions on various forums, so that’s pretty good support methinks.

This is nice little amp/cab combo.  Sure it’s not your boutique level of amps but at a fraction of the cost it does a great job.  It’s got quite a fan-base across the ‘net so there’s plenty of info around regarding modding, upgrading etc.