This article was submitted by Guitar Jar contributor: Mark Angel

I was 11 when I got my first guitar. Actually it was my second guitar; the first was a complete junker from a jumble sale, so we’ll ignore that one, but as my mum thought I had a flair for the guitar she bought me a “proper” guitar.

That was back in January of 1974 and the guitar in question was an Egmond Lucky 7 Semi-Acoustic in a beautiful cherry red. 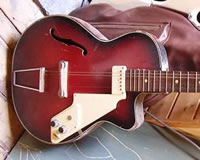 It cost my mum a whole week’s wages (£20.78 for the guitar and a soft case – I still have the receipt!) and she bought it as a complete surprise for me. I was so pleased that apparently I took it to bed with me that night.

The guitar came from the only real music shop in my town – Delmars Music Shop, in Darkes Lane, Potters Bar, Hertfordshire, UK. I spent many an hour (and many £££) in that shop over the next few years. I have no idea if the shop is still there.

I can’t really comment on the playability of the guitar as I didn’t really have anything to compare it to. I loved the colour and the shape and it had this clunky white scratchplate contraption fitted with a single pickup with tone and volume control. You could take the whole thing off with about three screws.
The neck was held on with a huge single screw and spring assembly and a small crew through the fingerboard hidden under one of the fret markers. Don’t ask me how I know that; I guess I was inquisitive when I was younger (nothing changes!).

The guitar had a single cutaway, and two F holes but only one was visible as the other was hidden under the scratchplate. It had a floating bridge and a tailpiece attached to the back of the guitar with a wooden strap button pushed into a hole in the guitar. At the other end of the strap I’m afraid it was the Country-and-western-shoelace-round-headstock deal. The tuners were three a side open type with white (plastic?) buttons.

As the Egmond was a semi-acoustic I didn’t need an amp at first. Eventually my Dad and I built a 100W amp from a kit from Crescent Radio in Wood Green, London. We also built two great 1 x 12″ cabinets fitted with Goodmans 12PG drivers that we bought from somewhere in London. I still have one of the drivers and the amp but the cabinets are long gone.

I joined a band pretty quickly after I got the guitar and even though we were young, we got some reasonable gigs quite quickly. Sadly I decided that Egmond was no longer what I wanted, sold it to a friend, and moved on to a Kay SG copy for the princely sum of £32 (yep, I have that receipt too) in 1976.

I wish I’d kept hold of the Egmond – they are quite sought after now it seems. I did find one about 10 years ago at a boot sale – it was in a right state. I had plans to restore it but in the end it went back onto eBay to fund some new toy. Maybe one day.

Tags: Are You Experienced Egmond Mark Angel My first guitar