I saw Steve Marriott (Small Faces, Humble Pie) with his band Packet of Three in a pub in North London in 1985. As many folks will know his guitar for that era with a red Gibson 335. I’d always loved the 335 – I guess I first became really aware of them when I noticed it was also the main guitar of Alvin Lee of Ten Years After. Fast forward 20 or so years and I was on the lookout for something a little more mellow than my Strat, Tele and Ibanez.  I took a long look at the Epiphone 335 but didn’t really see one I liked and then I set my eyes upon the Washburn. 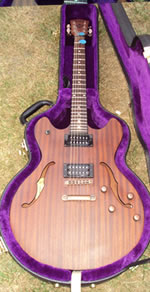 I picked up mine when they were around £150, and shortly after the price hiked up to around £250 so I was quite pleased.  It’s a heck of a great guitar for £150 so I can see why it commands a higher price.

The HD32-DM is clearly a 335 clone but it does have a character of its own.  My model is the one with distressed hardware (i.e. it basically looks worn from new), but thankfully the bodywork/paint isn’t distressed (I do struggle with the idea of taking a new guitar and beating it up before it leaves the factory).

My guitar is fitted with two very average humbuckers, a volume and tone pot for each pickup and a three way toggle switch. Three a side tuners on the nice looking headstock perform well and the tune-o-matic bridge is stable and functional.

No case as standard but I picked up the Epi case for around £50.  (Well it does come with a gig bag but that went straight into the cupboard).

I’ve tried 9’s, 10’s and 11’s on this guitar and settled on 10’s.  This gives a nice balance between strummy and bendable notes.  It’s no shredder this guitar but it does play well and (IMO) out performs the Epiphone.

Balance wise, even with the heavy body, it sits well on the strap. 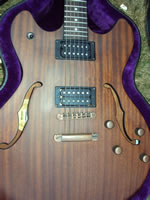 Unplugged you get some acoustic sound – just enough for quiet practice without an amp. Plugged in, the humbuckers sound great through a distorted amp but slightly lifeless and dull with a clean setting.  No heavy metal sound here though – just a great “generic” rock sound.

I can get a nice clean sound though – my Rocktron preamp has a nice Fender Twin patch and with that the Washburn comes to life.

The pickups are quite high output so I also find if I wind up the gain a bit on my Rocktron I can push it into overdrive and get some pleasing sounding drive and grit on the Twin patch.

This guitar feels very solid and reliable.  I can’t see any reason why it should ever let me down.  I’ve gigged it on quite a few occasions and it’s been great.

I’m very pleased with this guitar.  I love the strummy feel and that I can get rocky when I want it too.  It’s a lot of guitar for the money.