World famous effects pedal manufacturer Electro-Harmonix (EHX), expands on the “Freeze” pedal they released a while back with the SuperEgo Synth Engine.

…I was amazed how quickly and easily it was to create an ambient, atmospheric wall of sound… 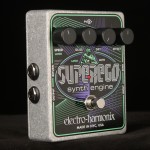 I’ve been intrigued by the Freeze pedal ever since its launch a year or so ago. The ability to infinitely, (freeze) your chord/notes is very appealing to me.

The SuperEgo takes off where the Freeze finishes, allowing guitarists to not only freeze the guitar sound but to also layer chordal progressions, and gliss and fade between the chords either manually or automatically.

In the first instance, the artwork is great, sporting an “all-seeing-Electro-Harmonix-eye” printed on the sturdy case.

Momentary Mode is activated with the toggle switch in the centre position. This puts the pedal in a manual mode, freezing only the sounds heard when the footswitch is pressed. Releasing the footswitch ends the sustain.

Latch Mode, activated with the toggle switch to the left position, ensures the sustained sound remains present as soon as the footswitch is pressed. The only way to turn off the sustain is to double-click the footswitch.

Auto Mode removes the aspect of clicking the footswitch each time you want the SuperEgo to sustain your chords. In Auto Mode, the SuperEgo does all the hard work for you and with the dials set appropriately, does a great job in adding a lot of atmosphere to your tonal palette, with ease.

The dials across the top include Speed/Layer, Gliss, Dry, Effect and there’s a VERY useful built in effects-loop, allowing you to build further on the atmosphere with a delay/chorus pedal of your choice.

I’ve never owned a pedal like this before and I’m very much a set-it-and-forget-it type of player. In truth, anything that involves combining feet movements with a range of dials or switches usually freaks me out.

In the case of the SuperEgo, I had some killer sustaining chord progressions within seconds. It was so easy to use, especially in Auto Mode.

There’s no problem in using this pedal. Within a short space of time you’ll be lost in layers of atmosphere and with a bit more patience, you’ll have dialled in the pedal to really suit your style.

The SuperEgo is fantastic; no strange overtones when the pedal is in “bypass”, no loud hiss – just quiet operation throughout.

The sound quality is where the pedal really shines. Using Latch Mode, you can use the Layer control to full affect by building chord progressions over each other. Combine this with a decent delay/chorus pedal in the pedals’ effects loop and you’ll have a bed of atmosphere to play over.

I was really impressed by the Dry and Effect controls too (Dry and Wet mix). They do a great job, allowing the guitarist to be VERY expressive; layering guitar parts, playing over the top of the progressions or gently adding your dry signal just as a dash of flavour. Very impressive.

The Gliss knob is the show stealer though. Gliss blends one “frozen” chord into the next, and depending on which Mode you are using, can either create some striking synth sounds through to some extremely musical ambient pads; absolutely brilliant.

This pedal is built like a tank. It lives up to the high standards we expect from EHX.

What a fantastic pedal! As a guitarist who usually shies away from “synth pedals” or anything that has more than one dial, I was amazed how quickly and easily it was to create an ambient, atmospheric wall of sound.

It can sound very “synthy” (if that’s a term!), but combined with a good delay pedal, a splash of chorus, you’ll be lost for hours in a room of ambient pleasure.

My favourite mode was the Latch Mode. Although Auto Mode is nice and easy, I discovered the more I grew in confidence in the pedal, the more I enjoyed Latch Mode, with the flexibility and freedom of expression through the wide range of sounds from the top controls.

This is a fun and expressive pedal and if used in moderation, could be the secret ingredient to many gigs and/or recordings.

No word of a lie – I closed my bedroom door at 10:00am to experiment with the pedal and came out at 4:00pm thinking it was time for my mid-morning snack! I had no idea that six hours had literally flown past!