posted by Pedals For Hire 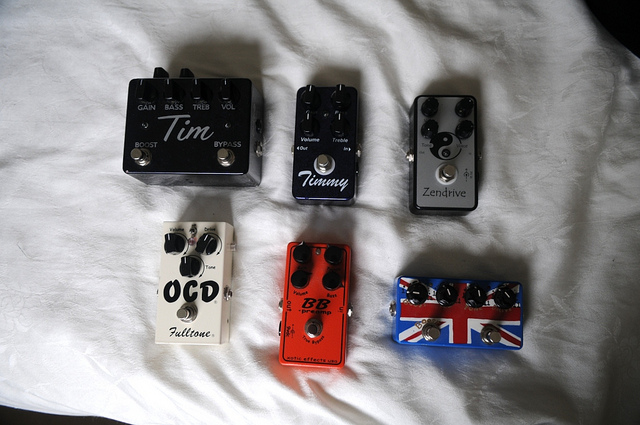 This feature was submitted by Guitar Jar contributor: Pedals For Hire

It’s part of the joy of running a guitar pedal hire website that there are always lots of great pedals around to play with! And it’s a cloudy Saturday afternoon so what better thing to do than to give some overdrive pedals a proper workout.

To do this, I’m using my Zinky Blue Velvet 25w combo (made by Bruce Zinky, Fender amp supremo before he went solo) and playing my PRS HBII, Cu22 and Cu24 (yes, I like Paul Reed Smith guitars!). I’m also using a Red Onion looper box to isolate each pedal in a true bypass manner so that I can better test them. These boxes are made in the UK to your exact specs (I even chose the LED colours!) and are a definate requirement if you are using lots of pedals or some with particular tone suck so you can have the cleanest path from guitar to amp.

This shootout consists of comparing a:

The BB Preamp is first. I found out about this pedal when researching the Mesa Boogie Lonestar Classic and coming across a player called Andy Timmons on Youtube. This pedal is all about warm, singing lead sound. I like to run it with the bass slightly up and the treble slightly down with the gain around 10 o’clock. It just screams out for some expressive noodling, all warmth and very addictive. I personally find I rarely go for lots of gain with this pedal, preferring to use it below 12 o’clock but . It always has plenty of presence and mids, perfect for punching out of the mix.

Next is the Fulltone OCD v4. This pedal is a classic that so many players have on their boards and has gone through several iterations. Version 4 is the newest release with less bass, richer harmonics and better volume controls. I tend to use the HP setting, everything sounds fuller that way and I prefer that – like I prefer humbuckers over single coils I suppose. Striking a power chord makes you immediately think of a Marshall sound. There is a lovely load of feedback from the hollowbody too, very natural sound and addictive. Makes me play ACDC riffs with some Darkness thrown in there.

The ZVex Box of Rock is up next. I always wanted a BoR, they have glowing reviews on the forums and Zachary Vex himself seems like a great guy. They also do amazing paint jobs on their pedals, this Union Jack version is a one-off made for the UK. Plugging in, you get whumped in the chest with some serious bass. It’s a gutsy Marshall sound and fun for a while but the extra bass is hard to dial out.

I despair a little, clearly the Zinky doesn’t interact with the BoR anywhere near as well as as the OCD did. But then, flicking the Zinky on the second channel and then hitting the Box of Rock is a revelation! The sound grows thicker and warmer, with more sustain and drive but no real colouring. Now the pedal sings properly and I spend a good fifteen minutes throwing out (or at least trying to play!) Van Halen solos with a big smile on my face. Eventually my wife subtely suggests that our 13 week old daughter is not enjoying it as much as I am so I move on…

Paul Cochrane is a one man band in the States that makes beautiful purple pedals; the Tim and his younger brother the Timmy. For those interested in the name, it’s a reference to Monty Python and the Holy grail (got to love an American with a proper sense of humour!).

Starting with the simpler Timmy, it’s important to know that the tone controls are unlike usual ones in that they are a “cut” style – meaning the further clockwise you move them, the further the bass or treble is cut out. Both pedals are known as very transparent and that’s just how they come across. Not piles of gain on tap but for a low to mid range overdrive, there is little out there that tops them. The basic sound of each guitar is kept the same and the pedal just adds on top of it. This all sounds a bit wishy washy, but its true! The Tim is a similar sound but has the extra features of an effects loop and a boost (with additional drive and tone controls).

Last up is the Hermida Audio Zendrive, an quiet looking pedal with the Ying and Yang insignia on the front of an otherwise grey case. Now this one seems to work best for me on the lower gain settings, more bluesy break-up than balls out distortion (it is an overdrive pedal after all). It’s a nice open sound that has me cranking out the pentatonic scales like my wife just left, my car won’t start and the bog just died. Other people I know use it at much higher gain settings so as always, it’s horses for courses.

Try before you buy

So what have we learnt? Each pedal responds in a different way, each interating slightly differently with the amp but also often interacting differently to the way it is described in the reviews.

So, it’s clear that you need to test out the pedal with your own guitar, amp and playing style before you can really know what it can do…

The Pedal For Hire penned articles featured on Guitar Jar were originally posted on the Pedals For Hire blog, and are re-used with kind permission.