This review was submitted by Guitar Jar contributor: Tom Fisher

I have always been a fan of Zvex stuff, very unique and high quality. I used to own an original Fuzz Factory, so I knew they made good stuff. This pedal is meant to sound like a cranked Marshall and I wanted something with a bit more midrange and less fizz, and this really fit the bill for me. Also the boost section being based on a Super Hard On is a big bonus and being placed after the distortion is what I used to do with boost pedals, so it was perfect for me.

For me this pedal is my distortion, my solo, my boosted clean sound, it just does so much for me and with only 4 knobs!

If you’re looking for a Marshall in a box with boutique quality but at a reasonable price, then look no further than the Box of Rock… 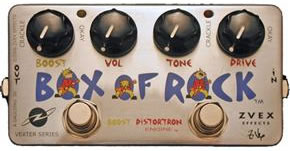 It has 4 knobs: Drive, Tone, Volume for the Distortion and a Boost level for the boost. It has 2 foot switches that engage either the distortion, the boost or both.

It runs on 9v batteries or can connect to a standard Boss style power supply.

As I have already mentioned, 4 knobs, 2 switches very simple! The controls are responsive and it took 30 seconds to dial in a good tone, what more could you ask for?

So it’s billed as a Marshall in box and it doesn’t fail to deliver. I have used this pedal with a few different amps including a Laney LC15R, Vox AC30 and an Egnater Rebel 20 and its tonal character stays intact with each of them. Of course the amps own character comes through a bit, but generally sounds consistently good through anything I have used.

On the distortion side you can go from a dry, just breaking up sound, good for AC/DC, Aerosmith style distortion. The more you turn up the drive the ‘spongier’ it gets and really emulates that cranked tube saturation well.

The boost is fairly transparent with a little bit extra mid range. Generally I use this live to boost the volume of the distortion for solos and it cuts through really well. I also use it as to give my clean sound a little bit of sparkle, just close to breakup. Cranking the boost level can add a lot of volume, almost more than you could ever need!

I primarily use this through 2 guitars: a Yamaha AES 620 HB (Les Paul style) and an American Fender Jazzmaster and it works really well with both. The les Paul/Marshall sound is there and it can even go close to metal sounds, think more Mastodon/classic metal sounds than anything really high gain. With the Jazzmaster it makes it sound really thick and not ear piercing like some dirt pedals sound with a Jazzmaster. I even read somewhere that J Mascis (Dinosaur Jr) ordered from Zvex 2 Box of Rocks in one enclosure to use on their latest album, and I can get close to his sound I think.

It’s compact, made of metal and very sturdy. It’s been on my pedal board for many, many gigs in various different conditions and it has never let me down.

This is a great pedal, very versatile and does what it says on the tin: it rocks! If you’re looking for a Marshall in a box with boutique quality but at a reasonable price, then look no further than the Box of Rock. Highly recommended.

This review was submitted by Guitar Jar contributor: Tom Fisher