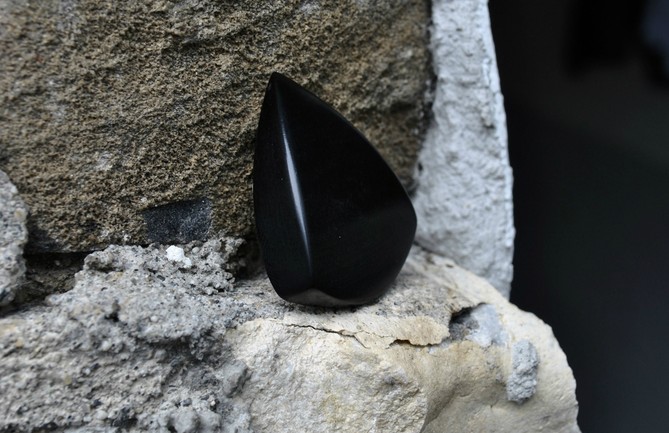 This review was submitted by Guitar Jar contributor: Fred Brum

It’s not common for me to review something apparently as trivial as picks, so something different is going on with these, and allow me to elaborate in the lines below.

Other than the form factor, when confronted with choosing picks, we’re usually going to find little variety in the market – let’s face it, most picks, in spite of fancy commercial names, are made of… plastic.

Patrick Hufschmid is better known for his guitars, which have a rather appealing “raw yet refined” ethos that attracts quite a few thousand people online, but more recently he decided to experiment with high grade engineering composites (used, among other applications, in nuclear plants, prosthetics and aviation) as well as some shapes of his own to develop a rather intriguing line of picks, which I couldn’t resist trying out, more than a year ago. Here’s what they are all about.

Patrick will craft picks out of friction resistant, slippery and ridiculously sturdy composites, but for the sake of this review, we shall focus on PHD and Tivar, using Patricks “Drop” and “Attack Drop” shapes, which are ergonomic takes on the humble plectrum developed by Patrick himself.

Do note that Patrick also uses materials such as Ketron and Torlon on occasion for such picks.

The “Drop” shape is a pointy, yet not overly so, very thick pick at its base (you can get up to 1cm at its thickest point) that gradually streams into a slimmer, about 1mm, tip; the same thinning occurs towards the base of the pick, to prevent discomfort and help to get a solid grip.

The “Attack Drop” is a longer, sharper point variation, also boasting a more triangular face shape than its Drop brethren.

They are sold as singles, and prices can vary depending on what material is used, going from 20EUR per each PHD drop to up to 35EUR per each Tivar drop.

While this might seem like a moot point pertaining a pick, it’s worth mentioning than the initially almost “alien” looking pick, with its thick core and 4 lines converging into a precise, sharp pick can be intimidating for those that have not gone beyond the realm of our well known standard shapes.

In, practice, however, one notices a far more relaxed grip and that the slippery nature of the material against the strings is nullified by our natural grease and sweat, creating a very solid, comfy grip, with not slippage except when practically not pinching the pick at all, which isn’t exactly the norm for playing guitar.

The resulting grip, coupled with how small the chance of the pick getting caught up in the strings is, gave me a sense of tremendous ease, with a certain something to the shape that invites one to naturally go into far less motion without sacrifices in volume or precision – quite the contrary, in fact.

While all picked techniques worked effortlessly, it is worth mentioning that the shape or size of the pick don’t prove to be a hindrance for the common tricks of stashing the pick in the thumb joint for finger picking or doing quick tapping passages using one or more right hand (or left, assuming our southpaw friends) fingers.

In spite of its very obvious ergonomic merits, which are rather convincing, these picks’ materials are responsible for noticeable changes in the way your attack will sound, with “loud and clear” being the keywords, but also “controllable” – the ease of control, coupled with the mass and grip, allows you to go from the massively loud potential attack they provide to barely audible with little effort, but always having a clear yet not too brash attack.

The PHD picks will have a smoother attack, while the Tivar will have a sharper, “pingier” tone to the attack, without having any noticeable metallic impact sound unless you strive for it or dig in too deep – personally, I only got that artefact when deliberately promoting extended contact between the pick edge and the string.

In short: volume, clarity and control seem to be the keys here, and they achieve those impeccably.

These materials aren’t just used for their acoustic properties, which become self-evident with the most trivial back to back comparison with any of our well known ubiquitous types, but durability as well.

I’ve been using one year old picks that took but ONE session of filing as I favour an edgier tip at most, while the majority never needed such a procedure.

I am a very busy musician, and play countless hours in a year, so do trust me when I say that these are remarkably durable in comparison to the vast majority of picks in the market, and I’ve melted picks that were marketed as “incredibly sturdy and durable” many times already.

It takes a fair bit of effort to destroy one of these picks, which does mitigate the proportionally high cost of each. In a live situation, a Jazz III will last me some 2 songs at the very best, as a comparison.

I am sure that most will wonder what makes picks such as these cost such a seemingly high amount of our hard-earned cash, but truth is that the resistance of these materials aren’t just diluting the investment over the course of their duration in functional form, but that the price also stems from the picks being built entirely by hand, with nothing but bandsaws, sanding wheels and handmade wet sanding and polishing, while destroying blades, sanding sheets and files along the way.

Patrick spends about one hour or more crafting each one, and lovingly shaping them and polishing them to deliver a superior product, and I may add right now that this is, without a question, a superior product indeed.

The ergonomy, tonal properties of these picks are like nothing I know of in the market, and there is quite a choice of shapes should the Drop types prove a bit too “out there” should you want to give this a try – as it stands, and if like me you are not willing to compromise on any of the components of your tone, I urge you to try these out.

This review was submitted by Guitar Jar contributor: Fred Brum