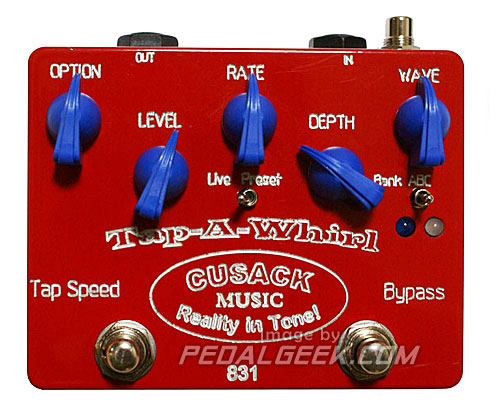 This review was submitted by Guitar Jar contributor: Evan Arendsen

I have been playing electric guitar for about 10 years, mostly Post Rock/Indie and Worship music.

Obviously Tremolo is used quite a bit in these genres and I have found the Cusack Tap-A-Whirl to be way better than any of the other boutique trems out there.

Cusack is based in Holland, MI (which is where I live). I really wanted to support them because they are a local business… and because they make FANTASTIC pedals.

There is also a pre-set function.

A bit overwhelming at first, but, with help from the user manual, this beast can be tamed.

BEST TREMOLO YOU WILL EVER HEAR. Enough said.

I have only had it for a few months now, but I LOVE it. The amount of features on it and the quality of build are second to none.

This review was submitted by Guitar Jar contributor: Evan Arendsen