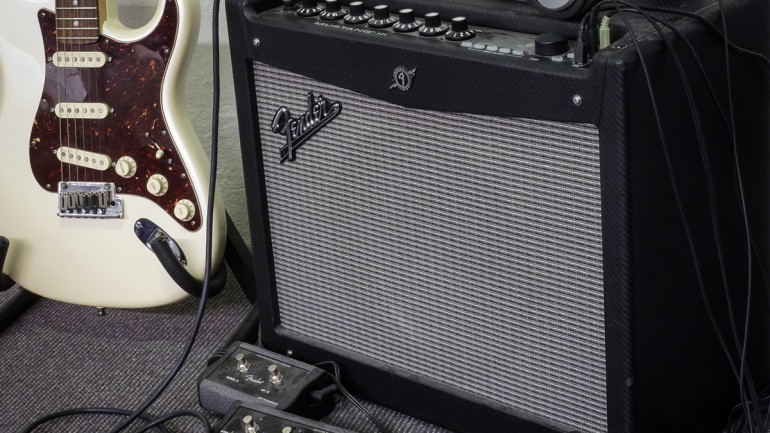 This review was submitted by Guitar Jar contributor: Joshua

I stumbled across this amplifier 7 months ago while shopping around for a new guitar. I happened to be using it to demo some guitars in store; and after hearing what it could do, I had to have one (despite the fact I wasn’t actually looking for an amp at the time…)

…the sound coming out of the Mustang III is phenomenal…

The Mustang III is a solid state modelling amplifier built by Fender.

Now, for those of you who might turn up your nose and walk away at the mere mention of ‘solid state,’ I ask simply that you put your reservations on hold and give this amp a chance (you might be pleasantly surprised).

The Mustang III packs 100watts and a 12inch Celestion speaker in a 16.3kg, open-backed cabinet. It features modelling of 12 different classic amps and has 37 built-in effects (including a full range of stomp boxes, modulators, delays and reverbs).

There are 100 storage slots on the amp for storage of saved pre-sets.

This makes a great practice amp (with its headphone jack for silent practice and auxiliary input for backing tracks), as well as having plenty of volume and sound quality for small to medium sized gigs.

The Mustang III also comes shipped with a 2-button footswitch (with the option of adding a 4-button switch) for easy control of all functions on stage.

One feature which I have yet to try out fully is the ability to connect the Mustang III to your computer using USB.

This allows you to save and edit amp and effects pre-sets on your computer, as well as downloading pre-sets made by other Mustang owners. It also allows for easy digital recording.

The Mustang III is fairly easy to use out of the box, with many of the factory pre-sets giving a very usable sound. However, getting the hang of all the settings for all the different amps and effects can take some time.

This is not so much an issue with the user interface (which is very user friendly) but more due to the fact that there are just so many ways to tweak and fiddle with your sound (which many gear-heads will love).

Simply put, the sound coming out of the Mustang III is phenomenal. I’ve got it paired with a Fender American Deluxe Strat, and together they simply shine.

There’s so many ways to tweak the sound coming out of the Mustang III that you can get very close to just about any sound you’re trying to emulate.

There’s nothing more really to say here, other than that if you’re sceptical, go and give this thing a listen for yourself.

Had it for 7 months. Zero issues so far.

That said, it’s spent most of its time in my room, so I can’t really comment on how it would handle life on the road; but It certainly doesn’t feel like it’s going to fall apart on you.

Overall I couldn’t really be more pleased with this amp.

Its combination of great sound, great practice-oriented features, as well as sufficient power and volume for when it’s need make this a fantastic all-round amp.

This review was submitted by Guitar Jar contributor: Joshua