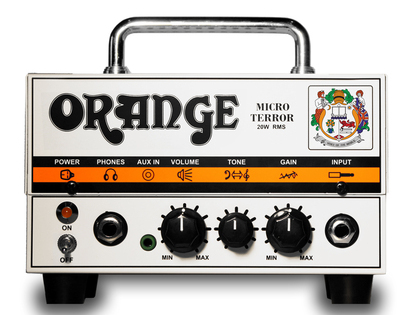 This review was submitted by Guitar Jar contributor: SlackDogDay

I am a confirmed Orange amp fan for many reasons. I have always loved the unique ‘Orange’ sound, which is why my main amp is the legendary Rocker 30 with PPC 212 cabinet which I have gigged countless times over the past 5 years. 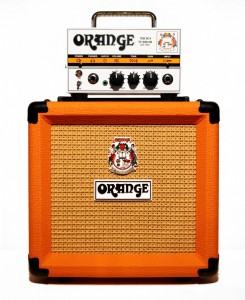 I love the pedigree, the Kudos, the quality, and of course….. the colour!

Having had many practice amps, none of which really gave me the ‘Orange’ sound at sensible volumes, I had always hankered after the Tiny Terror, but could never justify the outlay just for a home rehearsal amp.

Then along came the Micro Terror, same ‘toaster’ amp style as the Tiny Terror, but even smaller if you can believe that!

I tried this little amp out in Red Dog Music in Edinburgh through a 1 x 8 cabinet and was so impressed I handed over the required 99 quid after only 20 minutes playing.

The size, the simplicity, the sound and the volume that the Micro produces are nothing short of astonishing.

I did not buy the 1 x 8 cab because I felt sure this little amp was going to sound huge through my 2 x 12, and I was not disappointed.

Like the Tiny Terror, the Micro is a toaster amp style, which is basically a white steel box with vents. It sports power and speaker connections on the back, with a single 1/4 inch jack, power switch, headphone mini jack, three controls and an auxiliary mini in on the front.

Having a solid state power stage, it can be forgiving in the speaker resistance department, simply requiring a minimum 4ohm load, so you can hook up 4, 8 or 16 ohm cabs.

The Micro is very simple to use out of the box. Simply plug in the wall wart, a speaker cab and your guitar, switch on and play to your hearts content.

Through the 1 x 8 cabinet in the shop the Micro Terror sounded good, but a little boxy, however, I had already read, and was also advised by the Red Dog staff, that this little amp is capable of driving much larger cabs, and sounds incredible through them.

On the day of purchase I plugged the Micro into my Orange PPC 212 OB and after a few chords, I was wearing a huge Tommy Tucker grin on my face.

Tonally, the Micro is very sweet, lots of bottom end with punchy mids and crips highs. The Tone pot lends a huge amount of control over the sound, going from muddy and woolly with the tone rolled right back, to ‘ice pick in the ear’ with the top end cranked.

The Micro can do some pretty nice clean tones with the gain rolled back to about ten o clock and the volume boosted, with some very sweet classic rock tones on mid gain settings. Winding the gain up some more takes you into almost metal country, and on full gain, the little Micro really sings and will sustain and scream all day long with some lovely controlled feedback.

Once the gain is up, this amp can get scarily loud. So much so that I would seriously think it could keep up with an enthusiastic drummer in a small venue, provided you ran it through a decent cab.

Unmiced, the Micro might struggle a little on cleans at a gig, but miced up, this wee amp would be no disgrace in a full Rock lineup.

Finally, pedals: Some Orange amps are notoriously fussy about pedals, and some pedals that sound good through other amps can sound awful through some Orange amps, my Rocker 30 included!

The Micro, which does not have an effects loop, seems to handle ‘in line’ pedals reasonably well. I have tried it with Boss delay and chorus, Tube Screamer crunch, and Big Muff fuzz and it sounds great.

That said, I suspect I will use its own tone and gain sounds with maybe just a touch of out front reverb to give the sound some ‘space’. It really does not need any other pedals.

The dirty sounds clean up nicely just using the guitar volume pot, giving the option of a decent crunchy rhythm tone with a screaming lead break sound just a twiddle away.

In summary, the sound quality is very ‘Orange’ and very excellent!

Just bought it so cannot say, however, my experience of Orange products has been very good to date.

Bang for buck, the Micro Terror ticks all the boxes both as a practice amp AND as a modest gigging amp.

Primarily, I will use it as the former, but I will be taking it to gigs as a very capable backup amp in case of amp failure. I will probably fit in my jacket pocket!!

My only gripe about the amp, and this is only a personal thing, is that is uses a ‘wall wart’ power supply.

Now I do understand that Orange could not have made this amp quite so small (or light) if they had tried to fit in a mains transformer. I just happen to hate these flimsy power supplies with thin, cheap cables that get all twisted and tangled…..!!

This single gripe is easily mitigated by the overall quality of this amp.

The sound quality and volume of the Micro Terror is quite simply astonishing for its size, so if you need an awesome sounding amp capable of bedroom or gig tones and volume, and you like the ‘Orange’ sound, then I would highly recommend buying one.

You will not regret it.

This review was submitted by Guitar Jar contributor: SlackDogDay